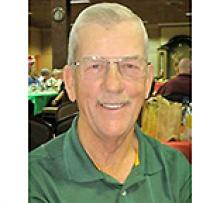 It is with great sadness that we share our father, Eugene R. Laliberte (Geno), aged 82, passed away suddenly on May 22, 2021, in Marquette, MI.
Geno was predeceased by his wife of 54 years, Donna Laliberte (Osland), his parents, and his sisters, Eleanor and Marjorie.
Geno is survived by his three daughters, Shelley of Lakewood, CO, Laine of Brunswick, ME and Karen Sewell (Tim) of Oakville, ON, his dear friend Nancy Letson of Marquette, MI and four grandchildren, Cory Broniarczyk of Maine, USA, Laura Broniarczyk of Massachusetts, USA, Alex Sewell of Perth, Western Australia, and Eric Sewell of Oakville, ON.
Geno also leaves behind a nephew, Randy Chaikowski, nieces, Susan Chaikowski, Rita Bomek of Winnipeg and Irene Jeffries of British Columbia.
Geno was born in Red Lake, Ontario on August 27, 1938 to Louis and Elizabeth Laliberte. He grew up and attended school in Kenora, ON, spending time walleye fishing on Lake of the Woods.
Geno started his railroad career with the CN in Kenora, then moved on to Winnipeg. On May 20, 1960 he and Donna married and had their first of three daughters. The family moved to Pembina, ND and Geno worked for the Northern Pacific Railroad in Noyes, MN.
Geno continued his railroad career, moving to Grand Rapids, MN and then returning to Winnipeg in the 1980s. Geno retired in 1995 from the Burlington Northern Railroad. Geno fished for walleye, golfed and curled most of his life and in retirement, Geno and Donna moved to Colorado and travelled to Mesa, AZ for the winter.
Geno was known for his storytelling and was never one to shy away from a bawdy joke or two. He was the best Girl Dad ever and he will be missed.
A celebration of Geno's life will be held in Winnipeg at a later date and he will be interred in Brookside Cemetery in the summer of 2022.