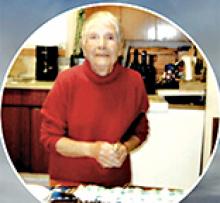 With heavy hearts we announce the passing of Helen Kwamsoos, June 8, 2021, at the age of 87 years. Helen passed away peacefully, at home, in the company of her beloved sisters and granddaughter, Neva, Barbara and Kresta.
Helen was predeceased by her husband Walter in 2010 and son Wayne in 2015; as well as siblings, Alfred, Herb, Dolores, Phyllis, Charles and James. Helen is survived by her loving daughter Dale (Darryl) and grandchildren, Kresta, Kelly, Zane, Jess (Drew) and Kris (Aimee); great-grandchildren, Ivan, Levi, Maggie, Oscar, Ella, Aiden and Owen; sisters, Neva, Barbara, and brothers, Jerry (Georgeanne) and Darcy (Marjorie); her special family Lori, Jon, Kirstie (Chris) and Chelsey; and nieces and nephews too many to mention.
Helen was the eldest daughter in a family of 11 children, where she acquired the gift of being a loving and nurturing caregiver. She grew up being used to hard work that life in the 1930s and 1940s in rural Manitoba presented. While in High School the family moved to Winnipeg where Helen graduated from St. John's High School. She worked as a clerk at a Drug Store on Keewatin Street and enjoyed her Saturday nights at Patterson's Dance Hall. She spent dance nights with Walter, the love of her life, and they married in 1953. Wayne was born in 1954 and Dale 1955. With Walter in construction Helen spent most of her young motherhood a working single parent but enjoyed greatly the weeks of the year they could all be together as a family. And as always, Helen was never really alone, there was usually a grandparent, a parent or a sister or brother staying awhile. In 1967, they brought their lives together by buying Consumer's Grocery on Logan Avenue. At that time, she became a support to a whole community, emotionally and financially. During that time, they bought a cottage in Whytewold and enjoyed their one and a half days off a week there immensely. After they sold the store in 1978, they soon bought a bigger family home in Matlock. It was there that they got to live their dream, having a summer garden and opening their home and their hearts to not only their children and grandchildren; also, to foster many children. Their house was always open. And it goes without saying Helen's mantra was "everybody eats when they come to my house". Helen obtained her driver's license in her 40s and went on to work for home care. She worked the elections in the Village of Dunnottar until in her 70s. Helen spent a lot of time being a great support to her non-driving girlfriends after Walter's passing. Helen sold the big house a few years ago and moved in with her sisters in Drayton Valley, Alberta. They enjoyed the last few years reunited. Helen had an amazingly big, big heart. For a small woman Helen had the stature of a giant. Magical memories made by Helen will live forever for many.
In lieu of flowers, donations may be made in her name to a charity of your choosing.
A celebration of Helen's life will be announced later when people can safely gather.