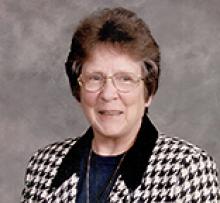 Barbara Martin (nee Caron) passed peacefully on Friday, June 11, 2021, at Deer Lodge Centre, at the age of 88.
Born in St. James, Winnipeg, she attended school at St. Ann's Roman Catholic Church where she remained a loyal parishioner all of her life.
She married Richard Martin in 1962. They spent many summers at their cottage in Grand Marais. Together they raised two sons: Greg (Jennifer) and Ed (Liane). Hard work was never a stranger to her, although in her down time she enjoyed gardening, knitting, and her heart-dog Cleo. Thanks to her nephew Gerry (Linda), she went on a trip of a lifetime to Europe in 2005. However, above all else Barb's true loves of her life were her three grandsons: Zachary, Connor and Bailey.
Barbara was predeceased by Richard in 1998, her brother Gerald in 2014, and brother-in-law Steve in 2021. She will be dearly missed by her children, grandchildren, in-laws, Corrine, Al and Claudette, as well as by many nieces and nephews.
In lieu of flowers, please consider making a donation to CancerCare Manitoba or to Diabetes Canada (Winnipeg).