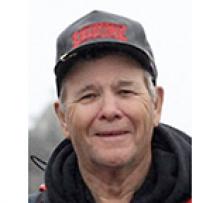 After a brief illness with cancer, our father and grandfather passed away at Red River Place in Selkirk at the age of 82.
Don is survived by his five children, Barb, Darrel (Karen), Kevin (Cheryl), Karen (Chris) Teasdale and Kerri (Chuck) Ross. He was also the proud grandpa of Tyler and Sara Teasdale.
Dad was born in Teulon the oldest of nine children to Grant and Esther Bond and leaves behind his brothers, Bruce (Donna), Ken, Leonard, Murray (Margaret) and sisters, Evelyn Bowles and Pat (Owen) Beever. He is also survived by sisters-in-law, Dayve, Sharon and Sylvia, along with many nieces and nephews. He was predeceased by his oldest daughter Loreen, brothers, Stuart and Raymond, brother-in-law Wayne Bowles, niece Sharon Bowles and nephew Clair Bond.
Don had many different ventures over the years including owning and operating the Massey Ferguson dealership in Teulon, working in sales for Enns Brothers in Oak Bluff and ending his career driving truck for Tolko in The Pas and later for Jade Transport out of Winnipeg. His most interesting endeavour was working as a commercial pilot for Gods Lake Air out of Gods Lake Narrows, where he would fly passengers and supplies in and out of the community and spent time getting to know the people there.
To say that Don had a love of the outdoors would be an understatement, as that was where he always wanted to be and was his happiest. He had many fishing and hunting adventures over the years that resulted in lots of good stories and tall tales. He gained many friends over the years who he shared these with and lots of good times were had. He also had a love of flying, which resulted in numerous close calls and again lots of stories, but somehow he always managed to come out of every one of these situations still in one piece.
Dad spent his last years living at Cedar Lodge in Teulon before being hospitalized in the winter of 2021. We would like to thank everyone there who provided friendship and support to him when needed during that time. Special thanks also to the staff at Stonewall Hospital who cared for him over the last number of months during his illness and helped to keep him comfortable.
Cremation has taken place and there will be no formal service held due to current restrictions.
In lieu of flowers, if you wish, donations may be made to the CNIB or Diabetes Canada.