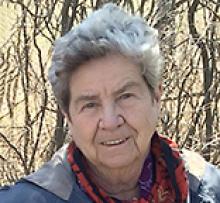 Doreen passed away, with family by her side, while residing at Rosewood Lodge in Stonewall, Manitoba.
She was born the fourth out of five children to David and Edith Lawrence in Eriksdale, Manitoba. She attended school until grade 12 and then started working at the bank in Ashern. She belonged to the Clydebank 4-H Club doing poultry which was the only project at the beginning.
She married Bill (Willie) in October of 1958 and they moved to Seven Sisters. Brenda was born in 1961, Heather in 1963 (passed away in 1964), Glenn was born in 1965 and Colleen in 1968. She cleaned cabins at Nutimik Lake and then washed dishes at the Hydro residence at Seven Sisters Falls. She and Dad curled and taught us to skate there.
Dad worked with Forestry in the Whiteshell. He then started work with construction as a Hoist engineer ending up in Dominion City and all over Manitoba and other provinces. When they moved to Stonewall, Dad worked for Comstock, then later the Town of Stonewall. Mom got a job at Stonewall Pharmacy which she kept for 25 years! She volunteered as a 4-H leader. She played piano and could play by ear. She got to do both singing and dancing with the Quarry Choristers. Dad was in the Tudor House Care Home until he passed away in 2000.
Her group of friends in The Red Hatters helped her with trips, laughter and good times. She also loved her garden and flowers and helped plant flowers for the Legion as well as Communities in Bloom. She was once awarded The Garden of the Week award, that led her to work at Jasperson's Greenhouse for awhile.
She was blessed to have a loving family and friends around her all her life. She filled everyone's life with happiness, beautiful gardens and love.
She was predeceased by her parents, Edith and David Lawrence, her brother Bob, her daughter Heather, her last love Keith Morrison, her husband Bill Deverill and many other family members and friends.
Left here on earth to celebrate her life, sisters, Lillian Lee, Triena (Stephen Reykdal); brother Ric Lawrence (Shirley); her children, Brenda (Rae Kujanpaa), Glenn (Laura Lee Tully), Colleen (Randy Chartrand); grandchildren, Jennifer (Graham Tough), Dale, Stephanie, Ashley; great-grandchildren, Breanna and Olivia.
Special heartfelt thanks go to the staff at Rosewood Lodge for providing a good home, excellent loving care, tenderness and compassion that they showed toward Mom and her family.
In lieu of flowers, donations may be made to the Rosewood Lodge Rec Program, 513 - 1st Ave. N., Stonewall, MB R0C 2Z0, the Alzheimer Society of Manitoba, 10-120 Donald St., Winnipeg, MB R3C 9Z9 or a charity of your choice.
A private family service will take place at a later date.