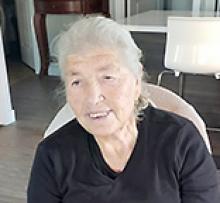 It is with profound sadness and with very heavy hearts we announce the passing of our dear mother and Nonna at the age of 85.
Maria Angela leaves to mourn her sons, Giuseppe and Vincenzo (Noula); grandchildren, Ria (Justin), Samantha, Gina, Daniella and Alaina; sister Grazia Spezzano (Antonio); sisters-in-law, Antonietta and Gail Bueti, along with numerous nieces and nephews, cousins and friends both in Canada and Italy.
Maria Angela was predeceased by her husband Francesco; her parents, Vincenzo and Caterina Bueti; brothers, Giuseppe (Giuseppina), Diego and Rocco Bueti; sister Filomena (Francesco) Bova; mother and father-in-law Giuseppe and Maria Licandro; brothers and sisters-in-law, Maria (Giorgio), Antonio (Filomena), Enza (Giovanni), Mimma (Giuseppe), Domenico (Carmella) and Giuseppe.
Maria Angela was born October 19, 1935, in San Roberto, Reggio Calabria, Italy. Mom married Dad in 1960 at the age of 25. They came to Canada from Torino, Italy in 1965 where she had worked as a seamstress. In Canada, Mom continued to work at her craft until she injured her back and was forced to retire. Shortly after her husband's retirement, Mom and Dad made their way back home to San Roberto where they spent the last 25 plus years enjoying their retirement.
Mom's door both in Canada and Italy was always open. She enjoyed when family and friends would come to visit. She would entertain them with stories about her younger days. One of her greatest passions was cooking... Sunday lunches will never be the same.
Mass of the Resurrection was held Thursday at Voyage Funeral Home. Entombment followed at Glen Eden Cemetery.
In lieu of flowers, we ask that you make a donation to your favourite charity.