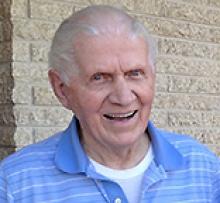 David Reimer was born on September 21, 1923, the seventh child of Isaac D. and Anna (nee Martens) Reimer.
Dave grew up in Rosenort, Stanley municipality, and as a young man made the transition to the Louise municipality where he began his farming career with brothers, Ike and Jake. In 1948, he married Emilie Lepp, began a family, and developed his farming career. As the brothers' families grew, Dave began farming on his own while assisting his father-in-law, John Lepp, in his farming operation.
Dave was at the centre of many community activities: the Pilot Mound school board; the building committee of the Crystal City Mennonite Church, the Pilot Mound Golf and Country Club, local entrepreneurial initiatives such as the Pilot Mound Cheese Plant, Southern Co-op Feeders, Rock Lake Oil Seeds, and Ram Helix. One of his final volunteer activities was overseeing the welding of the seating stands at the Pilot Mound Millennium Centre.
He was a tireless promoter of all things Pilot Mound and all things farming. He was part of foundational discussions that eventually led to the formation of the Canadian Foodgrains Bank and, throughout his life, remained a champion of providing food assistance for people in need.
Dave was well known in the community and one who knew everyone. Frequent exchanges on the street or in the coffee-shop began with variations of the question, "How's Bill today?"
He was a man who loved life: a good meal; a round of golf, played poorly or well; a full day on the farm, and, when retirement finally came, a visit to the farm, however brief.
Dave was a man who loved his family: his wife, his children and their spouses, his grandchildren, his great-grandchildren, his brothers and sister and their spouses, his nephews, and his nieces.
He was a man who was interested in life: sports, news, politics, church. He read the Winnipeg Free Press on his iPad in early morning and then, again, from cover to cover when the paper copy arrived. He had opinions and was not timid in voicing them. On the other hand, he respected a well-reasoned contrary point of view. He remained curious, open, and grateful through to the end of his life.
Dave was a man of quiet faith for whom "Come Lord Jesus be our guest," a childhood prayer learned in German, was a motto recited with sincerity throughout a lifetime.
Content with the recent rain and confident in the prospects for the crop of 2021, Dave fell asleep for the final time at Boundary Trails Hospital on Thursday, June 10, 2021. His son Garry and wife Emilie were at his side.
Dave was predeceased by his parents, Isaac D. and Anna Reimer; ten siblings, Diedrich, Margaret, Anna, John, Isaac, Jacob, Peter, Cornelius, Henry and Willie; and many in-law siblings.
Dave was liked, respected, and loved by many. But most of all by scores of nieces and nephews; brothers, Henry (Tina), George (Jenny) and Abe (Betty); sisters-in-law, Anne, Ella, Hilda, Nettie; 11 great-grandchildren, Noah, Eira, Hunter, Conner, Nigel, Stella, Inez, Kristopher, Solomon, Declan and Ethan; seven grandchildren, Lisa, Jotham (Stacy), Ramona (Scott), Tanya (Luke), Leah, Jan (Pat) and Stacie (Joe); children, Garry (Marge) and Elaine (Don); and Emilie, his wife of 73 years.
Dave Reimer lived a full, rich life. He will be deeply missed and fondly remembered.
A 'Celebration of Life' will occur at a future date.
Donations in memory of David may be made to the Mennonite Central Committee, 134 Plaza Drive, Winnipeg, MB R3T 5K9; or to the Canadian Foodgrains Bank, Box 767, Winnipeg, MB R3C 2L4.

Messages of condolence may be made online at www.wheatlandfs.com.