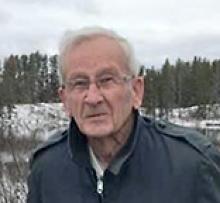 The family is saddened to announce the passing of our husband, father and grandfather, Norbert Vandenbossche, on June 12, 2021, at the Bethesda Health Centre in Steinbach. Dad was 90 years old.
Norbert leaves to mourn his wife of 60 years, Sylvia, daughter Christine (Don Scott), sons, Alan and Garry (Cindy), grandchildren, Matthew (Lindsay), Michael, Sara, Alexa, Eva, Jenna and Nicolas. He was predeceased by his son David and sisters, Rita and Agnes. Dad has many friends who are considered honorary siblings and children.
Dad enjoyed nature and the companionship of his many friends, neighbours and family; picnicking, playing cards, hunting near Riding Mountain or Turtle Mountain (where he grew up), enjoying a cold beer or cup of coffee in the backyard, having a good laugh and teasing Mom, the simple things in life. The curtains were usually left open in the living room and Dad would see who was waiting at the bus stop or heading off to school. He wasn't one to complain, and was of the generation where he would be referred to as a fine gentleman.
Dad's father passed away when he was a young boy so he took on the responsibility of the man of the house at the age of 12. This left a mark on him that defined his life. He worked hard and always tried to help others, as he explained that his family relied on the generosity of neighbours during this time of hardship. Dad quit school early and trapped and hunted during his teenage years to help support his family. He started working for the Canadian Pacific Railway and retired as the Work Equipment Shop Supervisor at Weston Shops after 39 years. He was very proud of his service, but even prouder of the number of years that he would collect his pension. Work even had a role to play in Dad's personal life as he and Mom met at the home of his coworker and her aunt. Two of their sons and two grandsons would eventually be employed with the railway as well. And when Mom and Dad moved to the new neighbourhood in Transcona and word got out that he was a mechanic, he became very popular very quickly. Although he attributed his popularity to his good looks and ready smile, his work ethic and many talents made him the complete package. And hence Dad's nickname Handy Andy.
The family would like to thank the many people who have been sending their prayers and positive energy to Mom and Dad as well as the staff at the Concordia and Bethesda Health Centre and Dad's long time friend and Doctor F. Olynyk.
As per Dad's wishes, there will not be a service. Dad will be cremated and ashes scattered at a later time in the Turtle Mountain area that he loved so much.
In lieu of flowers, hug each other (when possible), help your neighbours when you can and appreciate each and every day. Gramps found beauty and recognized the importance of rain and snow and sunshine.