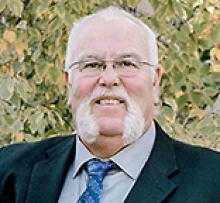 It is with great sadness, we announce the passing of Terry Halldorson. Following a brave battle with cancer, Terry passed on Friday, June 11, 2021, in Pinawa, MB surrounded by his loving family.
He will be deeply missed by his wife Janet of 33 1/2 years, sons, Todd (Alysa) and Jamie, brother Leonard (Catherine and family), sister Lue (Pete and family), the Leganchuks, and many extended family and friends.
Terry celebrated his 62nd birthday on June 7. He has gone to meet his Creator and parents, Helen and Halldor, and many relatives and friends. I'm sure they are reminiscing about the good times they had.
Terry's early years were full of fun. He cherished time with long-time friends, Bill, Gary and Alex including a weekend together last year. Terry created many memories at the St. Vital Hotel and the Marigold Restaurant. He loved to play hockey with the Glenwood Old Stars and baseball with several teams including the Dirty Muggers and Club St. B. Terry met Janet at a baseball tournament in 1982. He always loved to talk about the "Good Old Days".
Terry worked for the City of Winnipeg for 38 years, and held numerous roles: Arena attendant, maintenance of the sidewalks, roads, parks and mechanic. One of his last jobs was in the Training Branch, which he enjoyed, because he loved meeting people including his good friend "Porky" and then Gary. Later, Terry worked part time at the Notre Dame Arena, cleaning the ice for over eight years and had lots of good times with his co-workers there.
He loved spending time with family and his most precious gifts - Todd and Jamie. He enjoyed taking the boys to their sports and camping, including 15 years at Falcon Lake, creating many great memories with friends. One favourite memory, which friends may recall, is when Terry helped the boys make a mini-golf course on our site.
The boys will carry on Terry's passion for golf (Todd) and fishing and ice fishing (Jamie). Terry played countless rounds of golf with Brent and the Brewers, and spent hours fishing with Walter and ice fishing with the Treger men (the big house).
After retirement, Terry wanted to be close to golf and fishing. We had a seasonal camp site at Relax Ridge (thanks Brent for everything) and then purchased a house in Pinawa. Terry became the course marshal at the Pinawa Golf & Country Club, where Terry could continue to meet and greet people. Thanks to Vicki and Adam (he so loved the morning coffees and the occasional visit from Flipper).
Our family is also thankful to Rey who took Terry on his last day of fishing.
Terry said he had "No regrets, I did what I wanted and when I wanted, except one thing… perhaps I should have listened to my wife and quit smoking."
Terry says: "FAREWELL TO ALL, and I HAD A GOOD RUN AT LIFE"
The family thanks the staff at Pinawa Hospital for making his last months as comfortable as possible.
I would like to thank all the people that were in contact with us during the time of my husband's illness. People may not realize how a little act of kindness such as a phone call can help someone going through a difficult time.
In lieu of flowers, donations can be made to the Winnipeg Humane Society.
A Celebration of Life will occur in the future; should you want to be included please provide your information to: celebrateterhall@gmail.com.