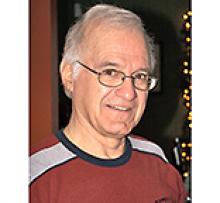 With heartfelt sadness and everlasting love, we announce the peaceful passing of Paul Hunter on June 9, 2021.
Paul was born in St. Catharines, Ontario on October 17, 1944. He grew up in the small hamlet of Campden, Ontario, where he and his friends would build go-carts and rafts from any spare parts they could find and swim in the small creeks. In 1957 the family moved to Gypsumville, Manitoba and he did in fact walk two and a half miles to school in winter through fields and bush.
A lifelong musician, Paul picked up his first guitar at 11 years old and was hooked. In late 1960 he joined a group called the "Four Sharps" which later became "The Crimson Tyde". For most of the 1990s he played in the back-up band at the Irish Pavilion during Folklorama. More recently he played with a group that entertained at various retirement residences, which he thoroughly enjoyed.
Shortly after high school, Paul was employed with Dominion Bridge for 24 years. Just before they closed in 1989 he started a business with colleague and long-time friend, Wilf Pitz. He retired in 2017, which allowed him more time to devote to his golf swing and spending time with family and friends.
Paul was a devoted husband and father. He married Elizabeth in August 1971. Together they raised four children, Janice, Donald, Cheryl and Amber. Paul and Elizabeth enjoyed travelling and went on numerous cruises and winter vacations including Disney World with their children, and later with their grandchildren.
He had a terrific sense of humour and loved to tease. A gentle man, everyone that came to know Paul loved him. He was diagnosed with MS in 2001, and not one to dwell on what he could no longer do, he decided to take up Taekwondo at Kang's Academy, going on to obtain his 4th Dan black belt. Paul was an avid sports fan - golf and hockey being his favourite. He attended many Jets games with his daughter Cheryl and went on several golf trips to play the links at some of the most popular US courses. His most memorable golf game, by far, happened on July 1, 2009 when got a hole-in-one playing at Larters. He was a member of Larters St. Andrews Golf Club for over 25 years and formed many wonderful enduring friendships there. Paul enjoyed golf and breakfast with the "good ol' boys" along with meeting up with them for dinners and winter golf.
Paul's pride and joy were his grandchildren. With the birth of his first grandchild he took great pleasure in reliving his childhood through them, seeing their smiles when they came to visit and playing silly games. On one occasion when the two youngest grandchildren came to spend the night, Paul and Elizabeth took them outside to howl at the moon. He attended countless ringette games, swim meets and gymnastics competitions, so they could see Papa in the stands cheering them on in their accomplishments.
Paul was predeceased by his loving wife in 2020. Left to cherish his memory are his children, Janice (James), Donald, Cheryl, Amber (Scott) and beloved grandchildren, Caitlyn, Olivia and Kennedy.
Always a positive influence, in writing a short biography a few years ago for a "good ol' boys" dinner, he mentioned "Life has been so good to me that I'm thinking of getting a bigger bucket." We will miss this extraordinary and kind man. Thank you for all that you have given us and the love you have shared.