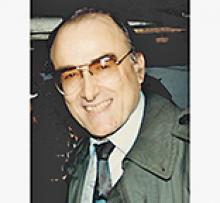 William Douglas Fogwill passed away peacefully on Friday, June 11, 2021, at the age of 83 in Winnipeg, MB. He is remembered as our beloved husband, father, loving grandfather to nine, uncle, cousin and brother.
Douglas was born in St. John's, NL on March 25, 1938, to Irving and Jennie Fogwill. He completed his B.Sc. in Geology from the University of Newfoundland in 1960 and did his post graduate work at the London School of Economics, the Colorado School of Mines and the University of Saskatchewan. In addition to being a director and officer for the Manitoba Prospectors and Developers Association, he was a member of the Manitoba Association of Professional Engineers & Geoscientists, a lifetime member of the Prospectors and Developers Association of Canada, as well as a former District Vice President of the Canadian Institute of Mining, Metallurgy and Petroleum. He participated in many mineral discoveries including copper-nickel, uranium deposits and new gold mineralization in Manitoba. He always joked that he is a 'rock doctor from the rock'.
After his retirement from the Manitoba Department of Energy and Mines he worked as Prospector and Consulting Geologist in mineral property research, evaluation, and management. He was a lover of sports, especially basketball and March Madness. He taught all three of his children, almost all his grandkids, and as an active big brother many other children how to play and love the game.
He is a published award-winning creative writer following in his father's footsteps. He will be remembered by his friends in Winnipeg for his love of dancing, his poems, short stories and songs he composed. Doug on the guitar and Loretta Joyce on the keyboard spent many musical hours playing music together. He thoroughly enjoyed his annual winter escapes to Ocho Rios and Florida.
He is survived by his wife Loretta Joyce and his three children: Allan (Tracey), Lawrence (Karen), Anna (Rob); eight living grandchildren; his beloved sister Sylvia (Ray); cherished niece Pam (David), and numerous Fry family cousins.
A Celebration of Life service will be held on Saturday, July 10 at Barrett's Funeral Home in St. John's, NL.
As with many Newfies Doug (goog) wanted to come home for his final rest. He will be interred at Mount Pleasant Cemetery aside other loved family members (Fogwills and Horwoods).
In lieu of flowers, donations can be made to the Heart & Stroke Foundation or any local Big Brothers Association, with appreciation.