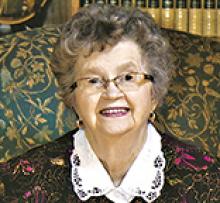 It is with deep sadness that the family says good-bye to Mildred Jean McArter (Wood), who passed away on Tuesday, June 15, 2021, at the age of 94 years.
Jean's life experience spanned from the late 1920s until her passing. Only those from her generation will genuinely appreciate the depth of her life experience. From simple rural beginnings to the present day, Jean took it all in with enthusiasm and humour. Jean will be deeply missed.
Jean is survived by her brother Jim (Bev), sister Phyllis; six children, Ann (Derek), Diane (Larry), Beth (Jim), John, Cameron (Michelle), Karen (Len); 11 grandchildren and 13 great-grandchildren. She is predeceased by her husband Morley; parents, Robert (Bob) and Muriel Wood; daughter Kathy; and grandson Robert.
She was born in Hartney, Manitoba on July 29, 1926. She married the love of her life, John Morley McArter, on June 14, 1947 in Hartney, Manitoba which lasted 64 years with seven children. Jean devoted alot of her time to community service with the Girl Guides of Canada as District Commissioner; and as a member of the Warrant Officer's Wives Club in Chatham, New Brunswick , when in 1976 she served the Queen and the Duke of Edinburgh at CFB Chatham where they attended a provincial luncheon; and with the St. Amant Centre. In tradition with her mother, Muriel, who was a member of the Excelsior Rebekah Lodge No. 70 of Hartney and became a 70 year member in 1999, Jean became a member of St. James Rebekah Lodge #47 and served as President of the Rebekah Assembly of Manitoba 1999 to 2000.
During her lifetime, Jean's work experience involved a career as a teacher, switchboard operator, and many years in the retail sector. As a hobby, she was an avid curler for 65 years.
Jean enjoyed public speaking and over the years she became well known for her signature toast, she was requested at many family gatherings, social events and small social gatherings at The Westhaven to give her toast to the delight of everyone. So once more for Jean:

"Here's to it and from it, and to it again.
If you don't do it when you get to it
You won't have the chance to do it again.
CHEERS !!"

The family wishes to thank all Health Sciences Centre Hospital doctors and nurses in the Emergency department and in the Observation Unit for their compassionate care.
There will be a private Celebration of Life held for family after which she will be reunited with Morley in Hartney.
In lieu of flowers, donations may be made in memory of Jean McArter to St. Amant Foundation Inc., 440 River Road, Winnipeg, MB R2M 3Z9 or to The Odd Fellow and Rebekah Memorial Eye Foundation, c/o 47 Acadia Bay, Winnipeg, MB R3T 3J1.