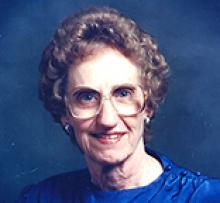 Muriel passed away peacefully on June 17, 2021, at the Concordia Hospital in Winnipeg, MB.
Muriel was born in Somerset, MB on April 25, 1928, daughter of Nelson and Elsie Foster. After finishing high school she worked for MTS as a telephone operator. On October 11, 1946, she married Roland Clearwater who worked for Manitoba Hydro. With Roland's job they moved to Winkler, Boissevain, and Elie, MB where their son Glenn was born on October 11, 1952. He was born on their sixth wedding anniversary. They moved to Steep Rock, MB in 1953, where their daughter, Myrna, was born on January 11, 1956. Myrna passed away on October 5, 2012.
Muriel and Roland enjoyed living in Steep Rock as it was a "one big family" community. Roland retired in 1983 and passed away in 1985. Muriel worked part-time at the Steep Rock Store, helped with the telephone switch board, served as President and Treasurer of the Ladies Auxiliary of the Royal Canadian Legion. She was an active member of the United Church and Steep Rock Community Club. She loved cooking, gardening, ice fishing, ski-dooing, curling, and playing cards. Their home was always open for family and friends. In 2001 she sold her home in Steep Rock and moved to Winnipeg.
She is survived by her son Glenn; son-in-law Jim Sutherland; grandchildren, Heather (Travis) and Neil Sutherland, Maria Clearwater; great-grandchildren, James, Ella, Hale, and Blake; her brother Glen (Rolande) Foster; sister Dorothy Friesen; nephew Randy (Kimberly) Clearwater along with nieces, nephews and friends.
Muriel is predeceased by her husband Roland, daughter Myrna, brother and sister-in-law Arnold (Vivian) Clearwater, sister Thelma, and brother Murray.
Respecting her wishes, cremation has taken place and no funeral service will be held. A graveside service will take place at a later date.


So when your thoughts do turn to me,
Know that I would not have you cry,
But live for me and laugh for me,
Cause when you are happy, so am I.

In lieu of flowers, donations can be made to Steep Rock Community Club, Box 66, Steep Rock, MB R0C 2Y0 or a charity of your choice.