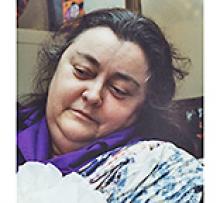 It is with heavy hearts we announce the death of Margaret Kathleen Trevenen Black.
She passed on June 17, 2021. Born July 6, 1936 to parents Nesta Esme Woodhouse and William Genn Trevenen. She was the oldest of four siblings. She often recounted fond memories of her father's racehorse training, her beloved dachshund Madchen, and the scrappy fights she got into in the school yard.
For those who knew her, she was a strong and powerful woman with a sharp wit, and a stubborn conviction. In her youth she was a pioneering advocate for woman's rights, helped form a housing co-op, helped found Wild Strawberry Nursery, did community theatre, was a Consumer Advocate, and worked for the government as an Employment and Immigration Counsellor. She married Daniel Black and had four children. They threw wild parties at Christmas, known to family and friends as "Make the Rafters Ring" parties for their singing and food.
Margaret and Dan opened their bookstore on Sargent Avenue, later moved to Portage Avenue across from Assiniboine park. They worked together for over 40 years, finally closing in 2018. She knew every book in inventory and loved customers, rousing stories from them and having political debates.
This hardworking woman took no crap and told it like it was. Even being robbed at knifepoint, she locked the cash and called their bluff. She had no fear of death.
She is predeceased by her parents, Nesta and William; sibling John; and beloved son-in-law Erroll. She is survived by her husband of 62 years, Daniel; her brother Neville; sisters, Joan and Cynthia; children, Kathleen, Myvanwy and Megan (Greg) and Sean; her grandchildren, Keeley, Elowen (Stevie-Ray), Emma (Adam), Kira, Paris, David, Kassandra, Liam and Rowan and great-grandchildren, Sophia and Aurora.
In lieu of flowers, please donate to Winnipeg Harvest. A Celebration of Life will be held at a future day.