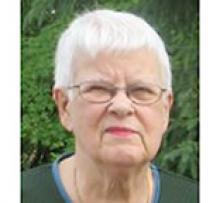 It is with great sadness that we announce the passing of our beloved mother, Joan Marie Mitosinka (nee Tytgat) on June 17, 2021 at the age of 82, after a brief, courageous battle with cancer.
Joan will be lovingly remembered by her daughters, Suzanne (Rick) Moritz and Debra (Mitch Tetrault); along with her grandchildren, Paige, Faith, Cole, Shawn, Leah and Marek. She also leaves to mourn her brother Len; many nieces and nephews; sisters-in-law, Liz, Gloria, Fran and Ann and brother-in-law Johnny.
Joan was predeceased by her husband Joseph; son Michael; parents, Edward and Julia and siblings, Robert, Victor, Marie and Gus.
Joan was born January 10, 1939 and was raised in St. Vital. She graduated from Glenlawn Collegiate with a business certificate and went to work at the Toronto Dominion Bank. In 1962, on a construction site in front of her home on St. Michael's Road, Joan met Joseph, the love of her life. They married in 1963 and her son Michael was born a year later. As a young family, they moved to Brandon, returning to St. Vital in 1965. This city girl agreed to move to Lorette in September 1967, two months before Suzanne was born. She settled on 134 acres, where she resided for the rest of her life. Her family was complete when daughter Debra was born in 1970.
Joan soon settled into the life of a farmer's wife, feeding cattle, plucking chickens and tending to the garden. She canned pickles and made salsa. She was a wonderful cook.
Joan was a selfless woman and volunteered in the community, even into her 80s. She taught catechism, worked in the sports' centre canteen, volunteered with our church and dedicated much of her time to Thrifty Treasures. Joan's friends were numerous. She had a smile for everyone and if you had the slightest of ailments, you were on her prayer list. Everyone's special day was marked in her cherished calendar and you were assured of a phone call to acknowledge your celebration. She was loved by so many. Her circle of friends were considered family.
Joan's pride and joy were her grandchildren. She always had cookies and creamsicles and some little trinket to give to the grandkids. Their artwork and pictures were proudly displayed on her walls. She cheered at ringette and soccer games. She went to winter concerts and grandparents' days. She loved hugs and gave them freely.
Joan was a kind and loving daughter, sister, wife, mother, grandmother, aunt and friend. She was dedicated to her family, friends and neighbours. She will be deeply missed.
Special thanks to the staff of 5N at Victoria Hospital and to the compassionate staff at St. Pierre Hospital for their loving care of Joan in her final days.
A private family service will be held in July.
In lieu of flowers, donations can be made to a charity of your choice.