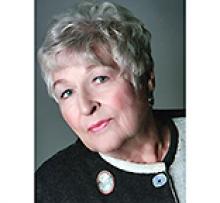 Jean Patricia Smellie died in Winnipeg on Thursday, June 10, 2021, at the age of 92.
Born in Welwyn Garden City, UK, Jean immigrated to Canada in 1955, first to Edmonton, moving to Winnipeg in 1980. A longtime resident of Armstrong's Point, Jean was actively engaged in Winnipeg's cultural scene. Jean was a fine stage actor herself, appearing at MTC, Rainbow Stage, Edmonton Studio Theatre, and in film and television. She served as President of the Women's Musical Club, and was active in the University Women's Club.
Predeceased by her first husband Alan Clarke, her second husband Dr. John McIntyre, and her third husband Hon. Robert Smellie, and by her son Paul in 1974. Survived by her daughter Penelope Clarke (Paul Inksetter) of Thunder Bay, by her brother Peter Stallwood and numerous nieces and nephews and grand-nieces and nephews in UK, and by her stepdaughter Carol Gamby (George), six stepgrandchildren and two step-great-grandchildren.
Cremation has taken place, and a celebration of Jean's life will be scheduled at a later date. In the meantime, Jean's family kindly requests that her friends and relatives take a few minutes to honour her memory by visiting her tribute page at EthicalDeathCare.com. A photo-biography, as well as memories and stories published by those who knew her, are available there.
In memoriam donations may be made to Jean's favourite charity, Operation Smile at www.operationsmile.org, or to the Thunder Bay Symphony Orchestra at www.tbso.ca.