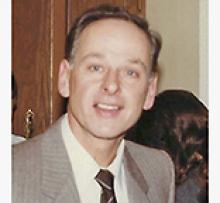 It is with deep sadness we announce the passing of Mike Koots on June 17, 2021, at Riverview Health Centre. Mike passed away peacefully, with family by his side.
He leaves behind his children, Ken (Allison), Wayne (Kathy) and Anita Kinnaird (Ian), and grandchildren, Kelvin, Simon, Emily and Abby. Mike was predeceased by his wife of 55 years, Christa, parents, Genowefa (Mikolasz) and Cornelis Koot, brother Robert (Bob) Koot, and sister Juliana Kroeker.
Mike was born in Utrecht, The Netherlands, and lived through the Second World War in Holland. During many of his childhood years he was separated from his family to live with farming families in the rural areas where sufficient food was available. During this period, Mike lived with a family that operated a wooden shoe factory, and his love of wood-working began. Following the war, Mike returned to Utrecht and in 1950 he graduated from Carpenter Trade School.
In 1952, at the age of 17, Mike immigrated to Canada with his family. He immediately began his 47-year career in the construction industry. Beginning in an Apprenticeship program in carpentry, he worked as a journeyman carpenter in Winnipeg, building houses for seven years. He then joined G.A. Baert Construction as a Carpenter Foreman on several commercial projects that included shopping malls and several government buildings, including the new City Hall. In 1969 Mike joined Bird Construction, where he soon became Project Superintendent. Over the next 30 years he was responsible for the coordination of all phases of construction on many large projects, including hospitals, university research facilities, hotels, processing plants, schools, military and other government buildings. Mike retired from Bird Construction in 1999.
Mike met and married Christa Heinrich in 1959, and they had three children. As Mike's family grew up, they would take annual road trips with a camper trailer to see many parts of Canada and some of the United States. Although Mike never embraced Canadian winters, he loved Canada for the opportunities it provided to him.
Mike will be remembered as hardworking and strong-willed, and as a perfectionist with boundless energy. When he built his own house in 1978, he had only intended to be the general contractor, hiring sub-trades to construct the house so that he could still work at his day-job. But, each night, after coming home from his 10-hour work-day, he undid and re-built almost everything the sub-trades had built that day, to ensure that each detail met his very high expectations.
Always a master craftsman, Mike continued to put his skills to work during retirement, to design and build wood crafts with Christa, including several decorative wooden chests and countless extravagant bird houses for family and friends. Mike was always eager to help his children with any of their home renovation projects; he was driven and meticulous. His family recalls those long days that started at sunrise, continued to nightfall and did not include any breaks. The only times Mike was seen relaxing, was when he was fishing, or tending to his garden, both of which he truly enjoyed.
Dad lived many years with dementia. Our family wishes to thank the wonderful staff at CD-2 for the exceptional care he received at Riverview Personal Care Home over the past two and a half years.
Due to Covid restrictions a small, private family ceremony was held at Glen Lawn Funeral Home.
In lieu of flowers, please consider giving a donation to the Riverview Health Centre Foundation.