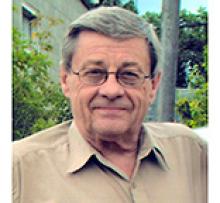 It is with heavy hearts we announce the passing of our father, grandfather, and great-grandfather on June 23, 2021 in the Grace Hospital at the age of 76.
Our dad was born in Trail B.C. and grew up an only child. He didn't often talk about his early years and to this day we are left with mostly bits and pieces. He left home at an early age which explained his high independence and "street-smarts". The kids were pretty surprised when we learned that in his youth he was part of a motorcycle club called "The Coachmen" with the leather jacket and metal name-plate to prove it. And who knew that he could play a bit of piano? These were the types of things that would reveal themselves over the years.
Mom and Dad were married for nearly 50 years before Mom passed unexpectedly in 2016. It was a traditional marriage for the most part with the "bread-winner" and "homemaker" which was more common at that time. Cindy, Jason and Clayton were born in the 1970s. Each parent influenced and taught the children in different ways but with underlying values that were shared by both. Dad's early years as a bachelor served him well and we were impressed with how he was able to adjust to managing all of the household tasks that were Mom's. Items in the freezer were commonly labelled with green painter's tape and Sharpie marker (what else would you use to label things??). He did very well to ensure that the candy bowl was filled for the grandkids' visits. He took note of all the birth dates and became a capable gift wrapper.
Dad was extremely intelligent and also very wise. He could usually read people like a book. If Dad said to us that someone could be trusted then you could blindly trust that person. He could be hard-nosed and disciplinary when needed. When dealing with problems he was the type to just sit and think it through until the problem was solved. He taught us a healthy distrust of banks, government and the taxman. We were to rely on ourselves not those other groups. "Don't count on receiving a pension because you never know what will happen". Our Dad could design and build anything. He had very well-rounded construction knowledge. Just drive along Chapman Road in St. James and you can see the wooden fence built in the late 1980s still standing straight today. While he did fall off of a ladder, fall through the floor joists and almost electrocute Clay (twice) over the years, all of his projects were successful.
Dad succeeded in passing on his intense work ethic and family pride. If you were not five minutes early, you were late. Today, if a Belton or Holloway doesn't show for work, then you might want to urgently check on their well-being. A Belton had to try to maintain a certain standard in their work. Do it right or don't do it at all. Measure twice and cut once. If you ever had an opportunity to see his penmanship you might agree there should be a "Don Belton" font on your computer. As a child when asking why a certain chore had to be completed his reply was "because you're a Belton". No payment for the chore was provided but then coincidentally, days later a few bucks were handed out "for no reason".
Dad's occupation was so important to him. While he did work at several jobs, his 40 plus years at Flynn Roofing (now Flynn Group of Companies) was most impressive. He was able to transition and adjust while the company grew from a tar and gravel small roofing business to a massive North American company. He was a dedicated "company man" 24/7 and a great mentor. We joked that he probably secretly e-mailed the company from his ICU bed. Near the end we wondered if he would ever completely retire from Flynn and the answer was obviously "no". He was proud of his service at Flynn and we are so very proud of him.
Dad was there for the kids and grandkids. We enjoyed family trips together where he would sit by the pool and smoke, develop third degree burns to his stomach and talk endlessly about the quality of the food and services. The times that we spent travelling together will not be forgotten. Really, nothing about Dad will truly be forgotten. Sadly, he did not yet meet little Elroy who is the first and only great grandchild. We are devastated that he is no longer here to guide us but we have the tools to move forward and make him proud.
Dad is survived by his children, Cindy (Robert) Holloway, Jason (Mirei) and Clayton (Tasha); grandchildren, Riley and Jacey Holloway, Zane (Brianna), Danica, Ryo, Ainsley, Reese, Preston; and great-grandchild Elroy.
The family wishes to sincerely thank every single staff member at the Grace Hospital Emergency and ICU. While the Pandemic has stressed health care workers to the maximum, you would never imagine it by how our Dad was cared for with attentiveness, compassion and professionalism. It made our time at the hospital less painful. Thank you to Chapel Lawn Funeral Home for their support.
Cremation has taken place. A private graveside service will take place in Chapel Lawn Cemetery.