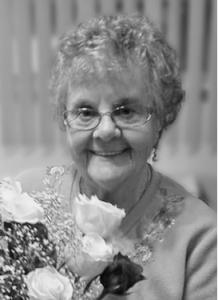 LOURIE: Elizabeth Mary 'May' (née Slater), beloved wife of the late Norman Lourie passed away on Monday, June 28, 2021 at the age of 96 years. May is survived by her son James William and his wife Gloria and their children Steven and his wife Robyn, Erin Kotschorek and Kristen; daughter Maureen Hawkins and husband Michael; brother Kenneth; sister Kathleen Matechuk and brother-in-law George; as well as numerous nieces and nephews. May was predeceased by her husband, Norman on January 8, 1998; parents, Mary and Matt Slater; brothers: Matthew Robert and Marilyn and Charles George and Donalda as well as sister Janet Letitia and Kenneth Thur; sister-in-law Marilyn Slater. May was born in Port Arthur, Ontario in 1924 and attended Prospect Avenue School and Hillcrest High. She worked at the provincial paper mill until 1945, when she married Norman William Lourie. She also worked at Bolton's Auto Service and the Prince Arthur Hotel until welcoming son James in 1955; in 1960, daughter Maureen arrived, completing the family. In 1967, Norm was transferred to Winnipeg, where May worked for the St. Boniface School Division. Another transfer brought the family to Brandon, where May was employed by the Prince Edward Hotel until its closure, then Firestone as a Credit Manager and finally at Frank Lawson & Son. May was very active in square dancing in Port Arthur, dancing for many years with the Harmony Hoedowners and the International Knuckleheads. She also enjoyed cross stitching, golf, going to her cabins at Deception Lake and Sportsman Park, as well as being with her family. A private Celebration of May's life will be held at Brockie Donovan Chapel. Interment will follow at Rosewood Memorial Gardens. The family invites you to watch the livestream of the Celebration of Life for May on Monday, July 5, 2021 at 11:00 a.m. (CDT) by visiting May's tribute page on Brockie Donovan's website at www.brockiedonovan.com. Flowers are gratefully declined. Donations in May's memory may be made to the Brandon Humane Society, 2200-17th Street East, Brandon, Manitoba, R7A 7M6; or to a charity of your choice.

Don't cry because she died. Smile because she lived.
Messages of condolence
may be placed at
www.brockiedonovan.com