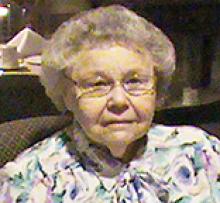 Passed away at the Baldur Personal Care Home on Thursday, June 24, 2021, at the age of 94 years, Sheila Alberta Mochoruk (nee Lennox) of Baldur, MB, formerly of Winnipeg, MB.
Sheila leaves to mourn her passing her three children, Avril Mochoruk of Glenora, MB, Val Crowe of Baldur, MB, Dr. Jim (Mary) Mochoruk of East Grand Forks, MN; three grandchildren, Kate (Ryan), Brendan (Hayley) and Colleen (Tyler); two great-grandchildren, Braylynn and Sage; sister Barb Crawford of Canton, OH; many nieces and nephews and good friends, Doreen McMillan, Anne Gray and Georgie Hodges.
Sheila was predeceased by her husbands, William Stafford and Zane Mochoruk, sisters, Margaret Murray and Val Graham, brother Bill Lennox, and by son-in-law Phillip Crowe.
Sheila was born in Winnipeg in 1926 to Doctors Bertrum and Florence Lennox. Her earliest years were spent in the Wolsley area of Winnipeg but most of her formative years were spent in rural St. Vital where she was able to enjoy the outdoors and a hobby farm setting, complete with calves, a horse and all the chores that went with them.
Sheila was a graduate of Success Business College and worked at General Electric until her marriage to William (Bill) Stafford in 1947. Her first baby, Avril, was born in 1948 and in 1949, Bill tragically passed away. In 1952, Sheila married Zane Mochoruk, her beloved husband for 44 years. Together they had two children Valerie and Jim. The couple lived a full and active life in their home on St. Vital Road. Sheila was always involved in the community, especially in St. Vital United Church. More recently, Sheila had moved to the Canoe Club on Dunkirk Drive where she lived independently for over ten years. Sheila was a devoted mother, grandmother and great-grandmother.
In the last year of her life, she was blessed to have lived in Baldur Manor, where she received excellent professional and compassionate care. Her daughters, Val and Avril, are grateful for the excellent care the staff provided and for the fact that they could visit her every day.
A private family graveside service will be held at the St. Vital City Cemetery, Winnipeg, MB at a later date.
Friends that so desire, can make memorial donations in Sheila's memory to the Baldur Manor, Box 128, Baldur, MB R0K 0B0 or to the Alzheimer Society of Manitoba, Unit 4B-457 9th St., Brandon, MB R7A 1K2.

Online condolences can be sent to the Mochoruk family by visiting www.willmorchapel.com
Jamieson's Funeral Services of
Glenboro-Holland in care of arrangements.
204-827-2480.