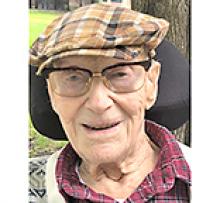 It is with great sadness we share the loss of our beloved father, Hugh, of Springfield, Manitoba, who passed away peacefully at the age of 100 years. He will be deeply missed.
Hugh is predeceased by his wife Audrey (Wansbrough) Richardson, parents, Bert and Helen (Conner) Richardson, brothers, Grey and Stan, nephew Robert Richardson, niece Virgina Tschirhart, dear companion Lee Dingwall and close friend Roberta McCannell. Left to cherish his memory are his sister Shirley Ross of Victoria, daughters, Judy (Jack) of Kelowna, Laurie (Will) of Courtenay, and Shirley (Jim) of Springfield, as well as a number of nieces, nephews and close friends.
Hugh was born and raised in St. Vital, on Rosewarne Ave. He graduated from the University of Manitoba, where he completed a degree in Agriculture, specializing in Plant Science. Hugh met the love of his life, Audrey, at the Winnipeg Canoe Club and they married in 1948. Sadly, Audrey passed away in 1986. Although a city boy, Hugh's lifelong dream was to be a farmer. He fulfilled his dream in 1950, when he bought his beloved farm in Springfield, where he raised hogs and cattle. Hugh also worked full time as an Agricultural Representative for the Province of Manitoba for 30 years. He was highly regarded in all the districts he represented: Starbuck, Beausejour, Steinbach, and Dugald Manitoba. Hugh enjoyed, immensely, traveling throughout, and meeting the farmers of rural Manitoba. Hugh retired full time work at the age of 70, but continued to work part time, into his 70s, for the Federal Government as a crop inspector.
Once fully retired, he and Lee enjoyed escaping Manitoba winters in Scotsdale, Arizona.
Hugh loved country music and dancing. He also had a great sense of humour and an amazing gift for story telling. And, oh, the stories he told. It was with great joy, that with these, Hugh regaled all who crossed his path.
We would like to thank Dr. Shawn Thomas and Dr. Dean Schrader for their meticulous care of Hugh in his later years, as well as the staff at Concordia Village and Kildonan Care Centre.
Over the years, Hugh supported many charities. The most outstanding being Plan Canada, through which, he generously fostered over 25 children from third world countries. In lieu of flowers, please make a donation to the charity of your choice.
Cremation has taken place. Planned for a later date are internment of Hugh's ashes and a celebration of his long and well-lived life.
Happy trails to you Dad, until we meet again .

Condolences and memories may be shared by visiting Hugh's memorial page at
seasons funerals.ca