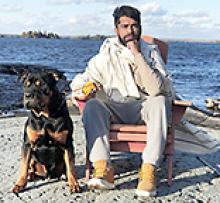 It is with overwhelming sadness that we announce the passing of our beloved son, brother, uncle, grandson and friend Kam.
Kam is survived by his parents, Amarjeet Singh and Suminder Kaur; his brother Balvinder; his sisters, Ruby and Jessie; brother-in-law Alim; and his two nieces, Aaniya and Asherah.
Kam was born on March 28, 1992 in Winnipeg, Manitoba. Shortly after he graduated from high school in the Maples, he bought his first dog Tyson who became his best friend and companion for the next 11 years. Kam chose Tyson as the dog's name because Mike Tyson was his favourite fighter. Kam and Tyson were inseparable, like Stewie and Brian in Family Guy.
Kam was the funniest of all siblings. He was goofy, mischievous, and loved to put a smile on anyone and everyone's face. His first eight years were spent on Egesz Street in Tyndall. We moved to the Maples in 2000 where he went to Finney School where he met his first friend Alim who is now his brother-in-law.
Kam spent most of his childhood with his friends outside, playing yu-gi-oh cards, Pokemon, Nintendo DS and riding his bike or scooter.
As he got older Kam started showing interest in cooking and loved experimenting with different dishes. He bought cook books, cooking gadgets and watched all sorts of cooking channels. He loved to send pictures of his latest creations (and boy, did it ever look SO good!). He loved to be in the water so much that he got his scuba diving licence at West Hawk Lake, Manitoba and bought a Jet Ski. Kam loved to travel to British Columbia with his friends and his dog Tyson. They would often go camping, fishing, and hiking. Kam spent some of his summers exploring Alberta and British Columbia with his friends.
Kam loved to watch UFC with his friends and host games at his place. His favourite fighter was Anderson Silva and he made sure that he watched every fight of his. Kam enjoyed watching movies and TV shows with his youngest sister Jessie. Some of their favourite TV shows to watch included Family Guy, Friends, The Office and Brooklyn 99. Kam raved about how good he was at chess and would often challenge his sister Ruby and his brother-in-law Alim in a game of chess. He also spent alot of time with his older brother Balvinder watching the Winnipeg Jets games.
Kam was a big family guy. He loved having family gatherings. He especially adored his mom. He would joke around with her and tease her just to make her smile. Kam was a great uncle to his nieces, Aaniya and Asherah who also adored him.
Kam will be profoundly missed by his best friend Tyson, family, friends and everyone who knew him.
Due to Covid-19 restrictions viewing prior to the service is limited to attendees by invitation only.
A funeral service is scheduled on Thursday July 8, 2021 at West St. Paul Crematorium & Funeral Home at 92 Merit Crescent, West St. Paul at 1:00 p.m. Due to Covid-19, attendance at the service is by invitation only.


For online condolences or to light a
memorial candle please log on to
www.weststpaulcrematorium.com