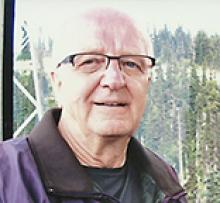 Ed peacefully passed away while in his sleep on June 26, 2021 at Holy Family Nursing Home.
He was predeceased by both his parents, Josephine and William Stanko and his sister- in-law Judy Stanko.
Ed is survived by his son Steven (Charlene), daughter Karen Milligan and his brother John along with many extended family members and friends.
Ed was born and raised in the north end of Winnipeg. He attended Tech Voc High School where he was a member of the 1957 and 1958 Hornets Football Team. In 2015 Ed and the team were inducted into the Football Manitoba Hall of Fame.
Ed retired from the City of Winnipeg Streets and Operations Division after 35 years. When he retired he continued the tradition of going to Eddy's place for lunch daily. When Steven and Charlene added a fury friend (Toby) to their family, he made sure to stop by their house daily to check on him. He was very meticulous with his cars; he was forever washing them. You could not count all the loonies he put into the Whellam's Lane Car Wash!
He kept active by golfing and going to the YMCA. When Ed could no longer run in the Manitoba Marathon, he started to volunteer with them. He took great pride in his position with the marathon by insuring the roads were in perfect condition for the runners, which included getting up at 3:00 a.m. on race day to do one last check.
Ed enjoyed watching sports on TV. He especially liked golf, baseball and made sure he didn't miss a Blue Bomber or a Jets game on TV. He enjoyed attending Bombers games in his younger days and even got to go to a Jets game at the new arena a few years ago.
The family would like to thank Dr. Terry Babick and all the staff of 3A at Holy Family Nursing Home for being so kind and caring to Ed, especially during this last year. We can't thank you enough.
In lieu of flowers, a donation can be made to the Alzheimer Society of Manitoba.
This obituary can also be viewed at www.cropo.ca.
Service to be held at a later date.