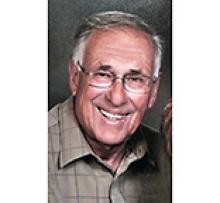 After his courageous battle with cancer, we are saddened to announce the death of Merlyn Biloki, age 78 years.
Merlyn was born at the St. Boniface Hospital in Winnipeg to parents Helen and Demetro (Dan) Biloki. Until attending school, Merlyn would share how the only two languages he spoke were Ukrainian (spoken at home,) and French, (spoken by his neighbourhood playmates.) Many of those playmates, he stayed in touch with all throughout his adult life. Merlyn was an avid bowler, billiard player and loved to roller skate. He also enjoyed fishing, curling and playing goalie for his rec hockey league. Merlyn was born with an exceptionally strong work ethic that lead him to start his own paper delivery business at a very early age. This devoted work ethic continued and strengthened, helping him become an electrical journeyman and thus begin his electrical career with well known companies such as Keewatin Electric and Boeing. Throughout his life, he continued to work hard, and developed and ran multiple businesses of his own. Primarily, he started his company, Interlake Electric, which he operated and grew until deciding to get into the grocery store business. With that decision, he built Family Fare in Teulon, which he owned until he retired.
In 1963, Merlyn married the love of his life, Kathleen. They were virtually inseparable for their 58 years of marriage. Merlyn loved to take Kath for a spin on the dance floor, travel or enjoy the simple things in life, such as hanging out at the lake or going for a ride in the golf cart with her. They also chalked up many years of games of Crib (always keeping track of wins and losses!). Together, they welcomed three beautiful children, Curtis, Alison and Cory. Merlyn was proud of many things, but he was most proud of his children and grandchildren.
Merlyn belonged to several organizations and was a dedicated Hunter Memorial Hospital Board Member, RM of Rockwood Councilman, Kinsman and was a longtime Lions Volunteer.
Merlyn is survived by his wife, Kathleen, sons, Curtis and Cory, and his daughter, Alison. He is also survived by his grandchildren, Kayleigh, Riley, Emily, Alex and Hunter. Merlyn was predeceased by his parents, Helen and Dan, sisters, Evelyn and Christine, and brothers, Vernon and David.
Cremation has taken place. A private family interment will take place at a later date, and a public memorial ceremony is yet to be determined.
In lieu of flowers, donations may be made to the Lions, Health Sciences Centre Cancer Care, or the Palliative Care Unit at Stonewall Hospital.