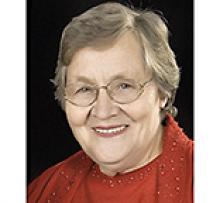 It is with great sadness that we announce Lenore's passing on July 1 at the Seven Oaks Hospital.
She is lovingly remembered by her husband of 60 years, Bruce, daughter Barb (John), granddaughters, Lena (Josh) Julie (Cody), and son Dave (Carmen). She is also survived by brother Oliver (Shirley) and numerous nieces, nephews and dear friends.
Lenore was born the third of six children to Harold and Lena Lyons on March 12, 1939 in Winnipeg where she had her early education. A move to the farm saw her completing her high school education and graduating from Balmoral, MB. After a year teaching on permit in Mafeking, she attended Teachers College in Winnipeg and graduated with a class of 650 in 1959. She taught for two years at the Lakeside Hutterite Colony.
Lenore married Bruce Matthews in 1961 and they started their married life and family in Charleswood. In 1967 they took on their Centennial project of building their own home in the Lilyfield area south of Stonewall and this was where they raised their two children Barb and Dave. In 1980, another move to start a farm in the RM of Woodlands north of Argyle. Lenore was an active part of starting and growing the farm alongside Bruce and Dave. From sheep to cattle, some grain farming and hay production as well as an electric fencing sales business kept her busy. Lenore was active in the United Church and UCW in Lilyfield and Argyle, and lent her support to the many community dinners and fund raising events. She was an amazing homemaker, her love of cooking, baking, gardening and sewing was boundless and her talent immense. She made it all seem effortless and loved to pass on these skills to her special little friends who came to spend time with Mrs. Matthews. She cherished her time spent with her granddaughters and enjoyed watching them grow into the capable women they are today. She was so very proud of them both.
One final move to Metropolitan Kiwanis Courts came in 2018 where they made some new friendships and adjusted to a slower pace of life.
The family wishes to thank the staff at MKC for their kindness and assistance these past three years. We would also like to thank the doctors and nursing staff at the Seven Oaks Hospital 3rd floor Unit 1 for the excellent care and kindness shown to Lenore in the past weeks.
In lieu of flowers, if you so desire, a donation may be made to the Alzheimer Society of Manitoba or the Manitoba Heart & Stroke Foundation.
There will be a small funeral held with the immediate family.
Thank you also to Mona Denton of the Lilyfield United Church and Ken Loehmer Funeral Services for their assistance in the arrangements.