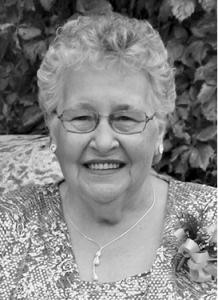 MATHESON: Margaret Matheson. After a day filled with family at her side, Margaret Janet Matheson (nee Watkin) passed away peacefully at her home in Brandon, Manitoba, in the early morning hours of May 17, 2021. She was just shy of 89 years of age. Margaret is survived by her sister Sandy (Glenn) Ponomarenko; her children Norman G. (Cindy) Matheson and Janet (Blair) Hume; her grandchildren Mark (Jeannelle) Hume, Jenn (Sean) Klemick, Karen (Darwin) Raga, Brandi Matheson and Bryce Matheson; and her great-grandchildren Aiden, Oliver, Charlie, Evie and Melissa. She also leaves many nieces, nephews, cousins, friends and neighbors who loved her dearly. She is predeceased by her husband Norman R., her infant son Fred, her grandson Norman 'Barry' Matheson, her parents George and Bertha (Sproule) Watkin, and her in-laws Norman A. and Vera Matheson. Margaret was the first of two daughters born to George and Bertha Watkin of Brandon, Manitoba on June 20, 1932. She grew up in Brandon's south end alongside her sister, Sandra, and many cousins, aunts and uncles. Marg and Norm married in August 1952 and settled in Souris, MB where they raised Norman G. and Janet (and sadly lost a baby boy, Fred, the same day he was born, but whom she always remembered). Marg spent many an hour with her best friend, Edna Swaenepoel, playing cards or scrabble and most likely gossiping about fellow townsfolk. She never missed a Royal Purple meeting, or a gathering with her dearest friends, Norma Dodd, Marie Peasley, Faye Long and Gail Eisler. When not with girlfriends, Marg could be found at "her spot" at the kitchen table; a cup of coffee and cigarette in hand. She loved doing crosswords or playing solitaire when on her own, board games with the grandchildren, and card games at family gatherings. She was never without a wisecrack and a laugh, and in fact, frequently gave out the middle finger when she had lost a round, or someone dared to disagree with her opinion (although appalled when she found out the true meaning of this, the occurrence of it never seemed to fade). Marg and Norm were creatures of habit and ran a tight ship. Schedules were generally centered around meals, with lunch usually including at least one extra child or grandchild on a lunch break. Afternoons were for resting, coffee and soap operas. For years, Marg's signature style was a muumuu and pair of flip flops at home; a nice dress/skirt topped off with a babushka and lipstick if going out. It took over 75 years to convince this woman to wear a pair of pants. Why fix what's not broken?
After Norm passed away in 2009, and her own health began to decline, Marg (reluctantly) moved back to Brandon to be closer to family. First at Victoria Landing in 2015 and then to Freeman Estates, where she lived until her passing. There were many staff/residents at both homes that she took a special liking to, but none quite like that of Whitney and Mackenzie in the last few years, whom we know (and deeply appreciate) treated her like their own grandma.
As we sat around to write this tribute, we couldn't help but laugh at her wit and wisdom, her stubbornness and nosiness. But we did so with great love and affection. She was "Margaret!" when Norm needed her; Auntie Margaret (high five!) when family visited. She was our Mom, our Grandma Nana, our Grams, our Gigi. She was the provider of back rubs, the first call on our birthdays, the hugger who was never too old for another. She will forever remain in our hearts and thoughts especially when we each have our "baby Margaret" moments.