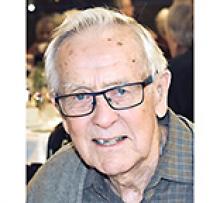 On July 4, 2021, our beloved Dad, John Dewar Stewart, peacefully went on his way, surrounded by his loving family.
He is survived by his daughter Christine Payne (Scott); son Bill Stewart (Joy); the lights of his life, his grandchildren, Thomas and Avery Stewart, Stefanie, Cassandra and Raquel Payne; and his dear sisters (and biggest fans), Shirlie Mackay and Vida Cass. John was predeceased by his wife Jean; brothers, Gordon and Ira; and his sister Marion.
Dad was born October 25, 1924 on an idyllic farm just outside of Charlottetown, PEI. He would regale his children and grandchildren with stories about the big four-story house he grew up in, surrounded by two brothers, three sisters and a couple of grandparents here and there. He often told us about all the mischief he got into as a young boy/man and he would say "I am amazed that I lived this long!"
Though he wanted to be a cartoonist, it was the Depression, and that career choice was not meant to be. At the outbreak of the Second World War Dad was attending Prince of Wales College but soon joined the Navy rather than tell his parents that he was flunking college. During the war he was a radio operator on both the East and the West coasts and always said that joining the Navy was the best thing he ever did. "I was just a kid and I got to see the world!"
After the war Dad returned to Prince of Wales College and studied agriculture. After graduation he came to Winnipeg to work for Canada Packers but then he moved to Edmonton to begin his career with the Federal Department of Agriculture. It was there that he met and married Jean Rylance. Shortly after their family was complete when Christine and Bill were born.
In 1971 Dad was transferred back to Winnipeg where he would happily live the rest of his life. Dad retired in 1986. He was lucky enough to be retired longer than he worked...not many people can say that! He was a master gardener and an amateur oil painter. Now his children and five grandchildren, who he was so very proud of, each will have those paintings to remind them of this wonderful, gentle man.
The family would like to thank the staff of Seven Oaks Hospital (5-unit 3) for their care and compassion in our Dad's last days. Special thanks to Dr. Peter Bialy for his kindness. We would also like to send our love, respect and admiration to everyone at Riverwood Square who kept our Dad safe during the COVID crisis and made the years he spent there both happy and healthy. "I haven't been bored a day since I moved in."

We love you so much Dad!

Due to COVID-19 restrictions, a private funeral will be held at the Wojciks Funeral Chapel.
In lieu of flowers, the family asks that donations go to Harvest Manitoba or The University of Winnipeg Opportunity Fund.