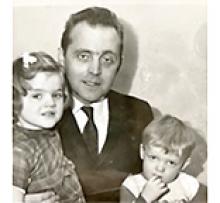 Robert George Riechel (Bob) of Pinawa, Manitoba passed away peacefully on July 13, 2021, at the age of 91.
Remaining to cherish his memory are five children: Eva, Carla (Byron Rogowsky), Pamela (Murray Winmill), Andrew (Marlene Gifford) and Melissa (Aaron Kinch); four grandsons: Daniel Rogowsky (Jennifer Greene), Taylor, Jordan (Cassandra Schwiede) and Cody Dyck. Bob was preceded in death by his beloved wife of 55 years, Dorothy; sisters: Marilyn Riechel and Margret Spencer of Nebraska.
Bob was born October 21, 1929 in Fort Calhoun, Nebraska and grew up in a farming family. Wanting his own farm, he started the journey to Alaska to homestead. However, while staying in Winnipeg, his plans were derailed by a beautiful girl who recently immigrated from Germany. After serving in the Korean war, Bob and Dorothy married in 1955 and raised a family together in Winnipeg, Manitoba. He worked at Canadian Aviation Electronics and then had a long, distinguished career with Manitoba Telephone System. After retiring from MTS in 1989 and settling in Ocean View, Hawaii for the winters, he became a valued substitute teacher for the Hawaii department of education. Bob had a talent for learning languages and was especially fond of the Japanese culture becoming fluent in speaking, reading and writing. His knowledge of the language and culture was an asset for teaching in Hawaii and accompanied a group of students to Japan.
Bob was an avid amateur radio operator since 1947, licensed VE4AR in Manitoba and NH6WH Hawaii. He was known for the massive radio antennas on every residence and vehicles including his bicycle. He also enjoyed photography and worked part time at a camera shop in Winnipeg. Bob's 'can do anything' approach lead to building three houses including the winter home in Hawaii and a summer house in Lac du Bonnet, Manitoba. Despite his many talents, Bob was humble and open hearted. He will be dearly remembered by his wide range of friends and students, for his incredible ability to quote historical facts and his insistence on speaking Japanese as a preference which entertained many.
In lieu of flowers, contributions can be made to CancerCare Manitoba.
Service will be performed at the Church of Jesus Christ of Latter-day Saints, Thursday July 22, 2021 at 2:00 p.m.
Zoom meeting is available, please contact Carla Rogowsky 402-990-5255 for login information.
Make a donation to