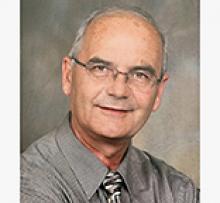 With great love and sadness, we share the passing of Roger Ledet at St. Boniface Hospital on July 11, 2021, the age of 67.
Left to cherish his memory are his wife Bernice, of 46 years; son Chris (Jana) and daughter Suzanne (Trevor); his grandchildren, Allie, Colton, Lexi, Sydney, Kyley, Ryker, and Teagan; his sisters, Yvonne (George), Denise (Campbell); and sister-in-law Marie; his in-laws, Renald, Diane, Janet (Lanny), Debra (Bruce), and numerous nieces, nephews, family and friends.
Roger was predeceased by his parents, Jean and Rosalie, his brother Henri, and in-laws, Minerva, Bernard and Bob.
Roger loved spending time with his family. He treasured every moment he spent with his wife, kids, and his grandkids. He enjoyed building, fixing and problem solving, berry picking, camping, hunting, and fishing with his family. His kindness, patience, and hard work was evident in everything he did.
Roger began his career at Spiroll, followed by Versatile, Triton, Vadeko, and then finally ending his career at Boeing. Roger obtained seven patents while working at Boeing. His ability to design and manufacture was extraordinary.
The family would like to thank the doctors, nurses, and aides in the Palliative Care Unit at St. Boniface Hospital for support and care. They would also like to thank their family and friends for all their support.
In accordance with Roger's wishes, cremation has taken place. A funeral will be held at a later date due to current restrictions.
Donations can be made to the Never Alone Cancer Foundation in Roger's memory.