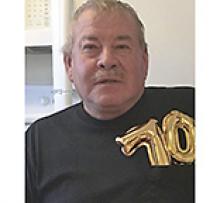 It is with deep sorrow that we announce the passing of Louis McLeod on July 13, 2021, at the age of 72. Louis was born on April 6, 1949 to Norman and Adrienne McLeod in Eriksdale, MB. Living in Lundar MB, until 1973 at the age of 24.
Louis was known to many for his quick wit, thunderous laugh and the ability to give everyone a nickname. Louis loved his family and friends, his door was always open and always there to help. He loved playing crib, talking on the phone and of course watching the Jets, Bombers and Blue Jays on T.V. Louis also enjoyed his deer hunting trips.
Louis married Brenda on July 6, 1976 in Thompson, MB. From there they lived in Churchill and later settled in Selkirk, MB, where they had two children, Barrett and Brandi. Louis was blessed with four grandchildren, Kaleb, Nicholas, Taylor and Oaklyn. He loved them immensely and was their biggest supporter and cheerleader. He would try his best to be at every sporting event and dance recital. He barely missed any. He was the loudest, proudest papa in the stands.
Louis worked for Manitoba Hydro, starting his career in 1973 at Notigi Control Structure as a camp maintenance man. Carpentry brought him to Churchill for a few years and then finding a permanent spot in Selkirk. While based in Selkirk he had the opportunity to work in many remote and isolated communities. He was very handy and able to build whatever was asked of him. His carpenter shop was a common gathering place to socialize and tell stories. Louis retired after 34 years with Manitoba Hydro, during this time he made many great friends and will be remembered for his kind heart, sense of humour and his unique wave.
Louis was predeceased by his father and mother, Norman and Adrienne McLeod, his sister Norma and brother-in-law Carl Magnusson, sister Annette and brother Joe.
He leave to mourn his wife Brenda, son Barrett, daughter Brandi, grandchildren, Kaleb, Nicholas, Taylor and Oaklyn; two granddogs, Sophie and Rory; brothers and sisters, Willie, Richard (Pat), Denise (Wayne), Larry (Sheryl) and Robin; as well as numerous nieces, nephews, cousins and friends. He will be missed by all
Cremation has taken place, memorial service will be held at a later date.