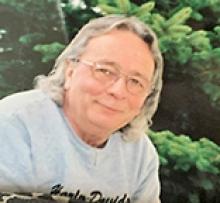 Rex passed at Misericordia Hospital, Edmonton on Friday, July 9, 2021. He was predeceased by his partner Joni Young on December 11, 2015.
He was born to Dr. A.D. "Cy" Pickell and Lillian Florence "Lil" (nee Howe) in Stonewall, Manitoba, July 15, 1941.
He will remembered by his children, son Derek Pickell (Nitsa), daughter Brooke McCalmon; Joni's family, daughter Karissa Olson (Quinn), son Allan Young (Sharon), daughter Barbi Price (Dennis); by his siblings, Merle Tomyk (Barry), Doug Pickell (Betty-Lou) of Stonewall and Gary Pickell of Modesto, California; several grandchildren, nieces, nephews and many other relatives and friends.
As a child Rex loved to spend time with his grandparents, Bill and Ethel Howe in their home at the Canadian Pacific Railway station in La Riviere, Manitoba. Helping inspect trains and travelling by rail with Bill, he gained his lifelong passion for trains. Throughout life he travelled by train at every opportunity especially to Grey Cup games as the CFL and the Eskimos were passions of Rex's. Rex was a fan of many sports and enjoyed cards, his classic car collection and he will be remembered particularly for the time he enjoyed at his cabin on Lake Manitoba and the pleasure he got from his many trips on his Harley. In particular Rex will be remembered for his sense of humour.
He attended school at Stonewall Collegiate, the University of Manitoba and University of Guelph College of Veterinary Medicine. During the late 1960s working as a veterinary pharmaceutical representative he witnessed the frustration of veterinarians unable to obtain medications for their practices in anything less than two weeks. He responded by developing a warehousing and distribution system in Edmonton able to deliver medications and supplies to veterinarians throughout Western Canada overnight using available public transport. This prior to the service by Fedex and UPS by years. Delibrex thrived, and providing this wonderful service to the communities of Western Canada became his career mission.
Rex was wonderfully kind, compassionate and generous. He never hesitated to stop and help anyone in need or distress, even putting himself at considerable risk more than once assisting accident victims. He was always ready to help a friend in need, and wonderfully generous with his favourite charities.
Rex dearly loved, adored and admired his Grandmother Ethel Howe. As he wished, his ashes will be interred with her in a simple graveside ceremony.
Rex was the valedictorian for his high school graduating class. In his address he compared the graduates to leaving port on a ship to sail the seas and explore the world. Rex has completed his exploration of the world and has returned to his home port and will rest in peace in the loving memory of his family and friends.
Cremation has taken place and a graveside service for family and friends will be held at 11:00 a.m., Saturday, July 24 at Stonewall Cemetery.
In lieu of flowers, donations can be made to the South West District Palliative Care Inc., or your favourite charity.