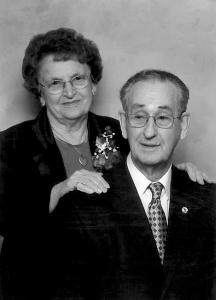 CURTIS: Ross and Ethel. Ross Arnold Curtis of Brandon passed away on December 10, 2020 at Fairview Home. Ethel Victoria Beryl (nee Ball) Curtis passed away on February 24, 2021 at Fairview Home. Ross was born April 14, 1921 at Chaplin, Saskatchewan and grew up on a farm near Reston, Manitoba with five brothers and one sister. Ross worked as a C.P.R. agent in many towns across southern Manitoba and Saskatchewan, finishing his career as a Mobile Supervisor with the C.P.R. Ethel was born near Alida, Saskatchewan on April 24, 1922; she had five brothers and three sisters. Ethel went to Normal School in Regina and taught in Southeastern Saskatchewan. Ross and Ethel were married on January 2, 1946, and during their 75 years of marriage, while working for the C.P.R., they were transferred to ten different communities. They were very involved in each of the towns they lived in and made many wonderful memories and lifelong friends. Ross and Ethel were survived by Ross's brother Donald Curtis, who passed away on March 31, 2021. They will be remembered by their three daughters and sons-in-law: Bonnie and Roy Farr of Carnduff, Saskatchewan; Glenda and Allan Evans of Winnipeg, Manitoba; and Lana and Rob Dyck of Balzac, Alberta. They will be greatly missed by their six grandsons, one granddaughter, their spouses, twelve great-grandchildren and many nieces and nephews. Ross and Ethel's lives will be celebrated with a graveside service on Friday, July 30, 2021 at 1:30 p.m. at Rosewood Memorial Gardens in Brandon. Expressions of sympathy may be made at www.memorieschapel.com.