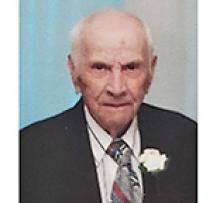 It is with deep sadness that we announce the passing of our beloved Father, Gigi and great Gigi on Sunday, July 11, 2021, at the Fisher Branch Personal Care Home at the age of 101.
Mike will be lovingly remembered by his daughters, Nellie (John Burak), Pauline Troyan, and son-in-law Dennis Prociuk.
Mike also had seven grandchildren, 11 great-grandchildren and four great-great-grandchildren.
He was predeceased by his wife Jennie of 66 years who passed in 2009, his daughter Shirley Prociuk, grandson Cory Prociuk, son-in-law Melvin Troyan, his four brothers, John, Nick, Roy and Harry, as well as his two sisters, Pauline and Mary.
Michael Marko was born November 12, 1919 on the farm in Hamrlik, MB. Mike married Jennie Boyko in 1942, where they farmed at Skylake. They worked hard and raised three beautiful daughters. They eventually retired to Arborg in their later years. Mike was always a strong willed and stubborn man who was lucky enough to remain in his home until this past year. He was a family man and loved to have his children and grandchildren around him. He will be fondly remembered for his large gardens, his hand knitted mittens and his wonderful stories from the past. He could always be seen cruising around Arborg on his scooter chatting with everyone on the street.
He lived a wonderful, long life but will be greatly missed by all who knew him.
Thank you to the home care workers, the Arborg Hospital staff and the Fisher Branch Care Home staff. Thank you to Mackenzie Funeral Home and to Father Harry Chuckry and his wife Joan.
A private family funeral was held on Monday, July 19 at 11:00 a.m. at the Arborg Ukrainian Catholic Church.