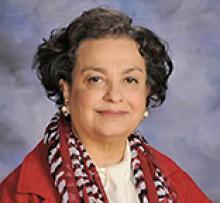 Mohtaram Gharib Shojania, writer, poet, educator, and supporter of the arts in Winnipeg for over five decades, died this week. She was 76.
Moti, as she was known to friends and family, immigrated to the United States from her native Iran at age four. She learned English almost immediately and because of her extraordinary reading ability was advanced two grades and graduated high school at age 16.
She came to Winnipeg in 1965 at age 20 after marrying Dr. Abdol Majid Shojania, a retired physician at CancerCare Manitoba and Director of Hematology at St. Boniface Hospital for 40 years. Moti intermittently pursued graduate studies in English Literature while raising her two sons, yet also found time to serve as a theatre and arts commentator with the CBC. Following completion of her PhD, Moti taught for many years in the University of Manitoba's English Department, on a range of topics from 17th Century literature to critical theory and popular culture. Before retiring, Moti served as Dean of Studies at St. Paul's College from 2012 to 2017.
From the moment she settled in Winnipeg, Moti was an avid supporter of the local art scene, actively supporting organizations such as the Winnipeg Art Gallery, Contemporary Dancers, Royal Winnipeg Ballet, Manitoba Theatre Centre and Manitoba Chamber Orchestra, among others. Moti served on the boards of many these organizations and also served as Chair of the Board for the Winnipeg Arts Council, during which time she was instrumental in securing Winnipeg's designation as a Cultural Capital of Canada. This distinction included a $2 million federal grant, enhanced by additional contributions from private and public sectors of the Winnipeg community.
A generous and creative hostess, Moti and her husband opened their home on Wellington Crescent for festive holiday celebrations but also for visiting musicians, writers, artists, and scholars, as well as the growing Iranian community in Winnipeg.
Moti's poetry covered topics from Iran (she published a series of poems Iran/I ran) to feminism, to her struggle with cancer, (Journey Under the Sign of Cancer). She was known by friends and colleagues for her wit, her endless curiosity, and warmth.
Moti became a member of Augustine United Church in the early 1980s and remained a devoted member of the congregation since then, frequently acting as a liturgist.
Moti raised two sons, Kaveh Gharib Shojania, MD, a Vice Chair in the Department of Medicine at the University of Toronto, and Shaheen Gharib Shojania, PhD, a chemist at the University of British Columbia. She was a devoted mother and grandmother. Her grandchildren remember her for the many enthralling stories she told - often invented during the telling, and the elaborate treasure hunts, complete with clever clues and rhymes, which she organized on family visits. Moti would always take family members visiting from out of town to the theatre, the Winnipeg Art Gallery, or performances of music or dance. Dinner table conversations ranged from high art to popular culture and politics. Her sons also fondly recall staying up late to watch culturally important old films and favourite television shows such as Colombo and Rockford Files.
Moti is survived by her husband Dr. A. Majid Shojania, her sons, Dr. Kaveh Gharib Shojania of Toronto and Dr. Shaheen Gharib Shojania of Vancouver, her daughter-in-law Sarah Gamester, her five grandsons, Evan, Elliot, Ali, Paul and Martin, her two sisters, Ms. Susie Gharib and Dr. Soheyla Gharib, and her nephew Dr. Alexi Nazem, and her five nieces, Dr. Taraneh Gharib Nazem, Ms. Pari Gharib Naraghipour, Dr. Simin Gharib Lee, Ms. Sabrina Gharib Lee and Ms. Ariana Gharib Lee.
A small private ceremony will be held shortly due to COVID restrictions. The family hopes a larger memorial can occur in the months to come.
In lieu of flowers, the family requests that donations be directed to The Moti Shojania Dean of Studies Fund at St. Paul's College Foundation Inc., 213-70 Dysart Road Winnipeg, Manitoba, R3T 2M6 or through www.canadahelps.org/ (Search St. Paul's College Foundation Inc.)