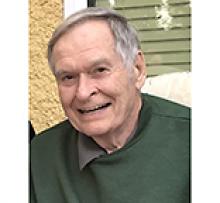 Peacefully in his sleep, after a battle with leukemia and dementia, the Holland family announces that Ted "Dutch" Holland entered into eternal rest, on July 22, 2021, at the age of 83.
Ted was predeceased by his parents, Dr. Thomas Edward Holland and Kathleen Ann (nee Pyne), his ex-wife Roberta Joy (Bobbie) Holland (nee McIntosh), his daughter Kristen Kathleen, his brother-in-law Roy Parkhill, and his dogs, Nipper, Rusty, Tess and Kirby.
He is survived by his sister Nancy Ann Parkhill, his son Robert (Jennifer) Holland, grandsons, Tommy and Porter, as well as his niece Tara (Don) Brousseau-Snider, and nephews, Tim (Christel) Parkhill, Ted (Kesia) Parkhill, and Jeff (Carol-Anne) Parkhill, as well as numerous cousins, great-nieces and nephews, and many friends.
Ted was born to an Army Surgeon, and a homemaker in Winnipeg, Manitoba on September 18, 1937. He lost five years with his father between ages three to eight, as he was overseas in the Second World War as a field hospital surgeon. He was never much of a handyman, because his father was in the war, as he liked to say.
He attended Queenston, Robert H. Smith, and Kelvin Schools, graduating in 1954. After high school he worked on the CPR trains, and a year at Banff Springs Hotel, followed by a fantastic year backpacking in Europe with friends. He came back to Winnipeg preparing for a career in Journalism. He received his Bachelor of Journalism at North Dakota State University, and his Masters at the University of Iowa. It was there in Fargo that he met his best friend, Murray Van Norman, and they were inseparable ever since.
When he returned home, he worked in public relations with CP Air and then approximately 25 years with the Royal Bank. After retiring from the bank, he realized his dream of becoming a sports journalist, when he began writing a sports column, "Toast and Coffee", with his longtime friend and writing partner, T. Kent Morgan.
His obsession with hockey began when his uncle took him to a hockey game at the old Amphitheatre when he was eight. Hockey would be his passion his whole life. He played on many teams up until his mid 60s, he was on the board of the Manitoba Hockey Hall of Fame, and worked in statistics for many tournaments. He was a Jets season ticket holder since 1972, then the Moose, then Jets 2.0.
Family came first for Ted. He was a devoted father to Kristen and Rob, and always put them first. He cared for Kristen for many years as her health failed. He was especially proud of his grandsons and took great interest in all the sports they played and enjoyed being at many of their games. They will miss him in the stands cheering them on.

In keeping with Ted's wishes, cremation has taken place, and due to public health restrictions, a private service will be held.
In lieu of flowers, if friends so desire, a donation in memory of Ted may be made to the Kidney Foundation of Canada, or the Winnipeg Humane Society.


It is with great sadness the family announces the passing of Ted Holland on Thursday, July 22, 2021, at the Oakview Place Personal Care Home, at the age of 83 years.
Funeral arrangements are pending and a longer obituary will follow in next Saturday's edition.