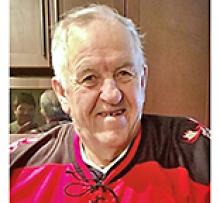 It is with heavy hearts we announce the passing of Anthony (Tony) Ogibowski at the age of 82 in Winnipeg, Manitoba. Tony was born October 6, 1938 near Sandy Lake, Manitoba on the family farm to Peter and Jessie Ogibowski. He was the second youngest of 13 children.
Tony leaves behind his loving wife of almost 56 years, Evelyn; children and grandchildren, Roy / Kim (Vanessa, Monica, Nicholas, Nick, Katie), Angela / Steve (Josh, Ben), Anita / Jeff (Madison, Meagan), and Tammy / Kyle (Paisley).
After leaving the farm life, Dad went to Saskatchewan to work for CP Rail for a few years. Coming back to Manitoba he worked at Swift's and finally at the RM of East St. Paul Public Works where he retired as a heavy equipment operator. Dad was also one of the founding members of East St. Paul volunteer Fire Department with over 25 years of service. He was very active in the local hockey community coaching and maintaining the hockey rinks. Dad enjoyed his yearly hunting and fishing trips with family and friends.
Family was extremely important to Dad, and he especially cherished his role as Gigi to his grandkids. The family home in East St. Paul was always open to anyone where many enjoyed a cup of coffee or a bowl of soup and laughter. Dad was a prankster and his hugs were the best! He will be missed by all.
As per Dad's wishes, cremation has taken place and a Celebration of Life will be planned later.