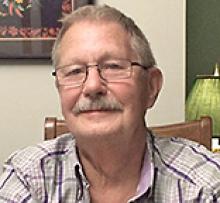 The family of John Chabai is saddened to announce his passing on July 22, 2021.
He is survived by his beloved partner, Tony Cabral; his sons, Les (Kate) and Jim, daughter Danielle (Jeff), grandchildren, Diana (Jeremiah), Noah, Emily and Owen, as well as his sisters, Margaret, Betty and Eileen; Aunt Christina and many other cousins, nephews and nieces. John was predeceased by his father John, mother Matilda, sisters, Grace and Jeanne, and brother Bobby.
John was born in Birch River, Manitoba on March 16, 1938, to John and Mathilda Chabai.
He went to school with his brothers and sisters in the Old Fort area near the Lenswood settlement and town of Birch River for high school. As a teen, he helped light the fire at the one room school.
After school, he went to Northwestern Ontario working in Red Lake and also at Minaki Lodge.
He made his way to Calgary, AB where he met and married Madeline. At this time, he worked as an accordion teacher. In 1969, they moved back to Winnipeg and John started to work at Canada Safeway, working his way up to Assistant Manager. In 1980, he moved on to the job as pricing analyst at the head office. In the early 1990s he ended his career at Safeway as Product Specialist, which was based in Calgary. He retired at 62 and returned to Winnipeg to be closer to his family.
John enjoyed classical music and the ballet, was a season ticket holder to the Winnipeg Symphony Orchestra and enjoyed the New Music Festival and Folklorama. John loved gardening, crossword puzzles and making wine. He also spent many winters in Phoenix, AZ.
In his later years, he enjoyed genealogy, and even made a few trips to Hungary to find out more about his family roots. He took Hungarian lessons and learned to make his favourite Hungarian dish, Chicken Paprikas.
We would like to thank the staff at the Grace Hospital for their thoughtful care during his final days.
Due to restrictions a private service will be held on Monday, July 26 at 1:00 p.m. at Bardal Funeral Home, 843 Sherbrook St. This event will be live streamed.
He will be laid to rest in Birch River at Crandell Cemetery on Wednesday, July 28 at 2:00 p.m. All friends and family are welcome to attend.