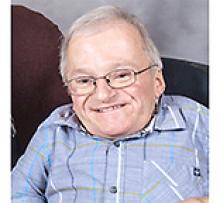 It is with heavy hearts that we announce the sudden passing of our beloved husband and father at the age of 72.
He will be sadly missed by his wife Linda and daughter Mindy, as well as his three younger sisters, Jill (Terry) Allard, Coleen (Guy) Dufault and Pam (Allan) McCaffrey. Also left to mourn is his niece Diana (Dave) and his nephews, Derek (Ashley), Dan (Courtney), Tom (Vanessa) and Michael (Alana). He was predeceased by his parents, Warren (Tim) and Ina Patterson.
Warren was born with Osteogenesis Imperfecta - a genetic bone disorder. He spent the majority of his first 16 years in and out of The Shriners Hospital, where he received care, and met his future wife, Linda, who had also been a patient during that time. Despite these life challenges never once did Warren let his disability define him. He was a fighter. He constantly challenged the status quo and was never willing to accept that he should have fewer opportunities because of his disability.
Warren joined various social committees to advocate for persons with disabilities and played a pivotal role in creating an accessible province. He was part of a team who successfully formalized the official parking permit legislation in Manitoba, had ramps installed in various locations, and changed the systems in place to ease transition for persons with disabilities into post-secondary schools and the workforce. Warren was never afraid to let his voice be heard and with this attitude he influenced change and inspired many of those he met along the way.
In 1976, Warren began working as a Fisheries Technician with the Province of Manitoba Fisheries Department where he worked for most of his adult life. There he re-met his wife, Linda, and five years later on September 19, 1981 they were married. Warren had many passions in life, one of them being music. He was always quick to share a song or a story about his favourite band, The Beatles. He intuitively knew how to set the right mood with his music so it was only natural that he worked as a music man for many years playing at various social events around the city, with his own business, PatterSound. Warren also loved to travel, he got his driver's license and had the opportunity to go on several road trips. He saw Canada from coast to coast, as well as travelled throughout much of the United States. He was passionate about many things but family was his number one. In 1991, his desire to become a father came true when an eight month old baby girl came into their lives. From that moment on he became a very proud and protective father.
Warren lived a full life. For the last 30 years he, Linda and their daughter Mindy spent most of their summers at their family cottage in Matlock, MB, where he played a large part in the community and made many lifelong friends. You could often find him socializing at the beach, having a drink on his deck, or making his rounds visiting friends at their cabins. He always had a love for meeting and entertaining people from all walks of life.
Warren, your vivacity, energy, determination, humour, strength, wisdom, and so much more will forever be missed. Thank you for all the happy memories you have brought to our lives. "Here's to you".
As per Warren's wishes cremation has taken place. There will be a service to follow at Thomson "In the Park" at a later date pending on Covid restrictions
We would like to send a very special thank you to Dr. J. Brian Sharkey for his many years of care and support.
In lieu of flowers, donations can be made to the ALS Society of Manitoba.