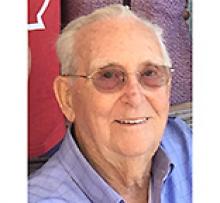 Don passed away peacefully at home, with his family by his side.
Don is survived by his loving wife Joan Cooper, his daughter Donna of Winnipeg, son Russell (Jan) of Vernon, daughter Janet (Bob) of Victoria, and grandchildren, Wesley, Michael, Brad (Kelsey), Nicole (Raymond), and Stephanie. Don was predeceased by his first wife Shirley (nee Harrison) in 1989.
Don raised his family in Winnipeg and Montreal while working for Air Canada. Don enjoyed hunting and fishing at Caddy Lake and Hilbre. Don and Shirley moved to Victoria, becoming successful realtors.
Don and Joan married September 15, 2009. Happy years were spent in Hemet, CA and Sidney, BC. Favourite pastimes were crabbing and strolling the Sidney Pier.
Don was a fair, honest, ethical man who enjoyed a good debate. He was a passionate champion of causes. Don was an excellent orator and storyteller. His children and grandchildren will forever remember his stories of Little Sunny Sunfish.
Don lived a full life and had his sharp wit and humour to the very end.
In lieu of flowers, a donation may be made to Dying With Dignity Canada.