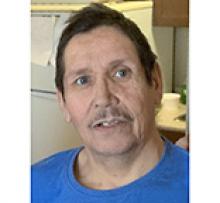 On Friday, July 23, 2021, with family by his side, our Brother, Uncle, Cousin and Friend, Donald Irvin Schuldt-Raven, aged 56, passed to the spirit world after a courageous battle with Cancer.
Donald was predeceased by his mother Rachel Raven, his father Herman Schuldt Sr., and his brother Glen Schuldt. He leaves to cherish his memory his sister Donna, his brothers, Herman (Freda), Barry and Kelvin (Corise); his nieces, Destiny, Natasha, Trinisha (Lonny), Rachel and Desiree, his nephews, Joey, Nathaniel, Christopher, Earl, Shane (Mavis), Tyler, and his close nephew Kurt (Desni), also many great-nieces and nephews.
Active Pallbearers: John Prince, Buddy Prince, Kurt Raven, Kelvin Raven, Braeden Thomas and Shane Rockhill.
Honorary Pallbearers will be: Dion Gregoire, Tyler Rockhill, Earl Rockhill, Steve Fontaine, Kelly Starr and Wendell Sinclair Sr.
Funeral services will be on Tuesday, July 27, 2021, at 2:00 p.m., viewing will be from 12:00 p.m. to 2:00 p.m. at the Private Tom Chief Memorial Hall, Scanterbury, MB.
The family would like to send their appreciation to St. Boniface Hospital for their kindness during this time.

Condolences may be sent to the family c/o Spirit Road Funeral Services Inc.,
PO Box 200, Fort Alexander, MB, R0E 0P0, 204-340-6490 or friends may leave a message of sympathy at spiritroadfs@shaw.ca