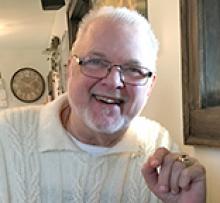 It is with deep regret that we announce the death of Gary Cordrey, on Thursday, July 22, 2021, at the age of 77 years, in Winnipeg.
Gary was originally from Brantford, Ontario but raised his family in Morden, Manitoba. He was a high school French teacher for nearly 30 years. He was known for his ability to turn any idea in his head into some created form as he could design, build, decorate, sew, bake, crotchet, garden and generally "MacGyver" just about anything! He was especially remembered for transforming the small Catholic church of St. John the Evangelist in Morden, MB, at every Christmas and Easter through his imaginative decorating talents.
He is survived by his former wife Neda Gaspar, his daughter Christie Paul (David Lowe), his son Damien Cordrey (Corene), his grandchildren, Bruce, Simon, Gavin, Megan, Cody, Ciara, his great-grandson Milo, and his nephews, Gregg Epplette (Linda) and Jonn Epplette (Simone). He was predeceased by his sister Jaaymee Epplette and his parents, Harry and Lily Cordrey.
Following a private family funeral service, Gary will be interred at St. Clement's Anglican Cemetery, 1178 River Road at Main Street, Selkirk at 12:00 p.m., Wednesday, July 28. All are welcome to attend.
In lieu of flowers, donations may be made to the North Point Douglas Women's Centre, 221 Austin St. N., Winnipeg, MB R2W 3M8.