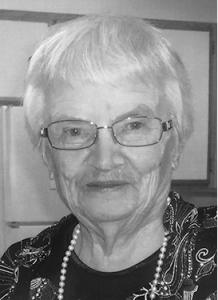 FERGUSON: b. July 22, 1923 – d. July 16, 2021. Joan Ferguson (née Bunting) died with her daughters beside her on Friday, July 16, 2021 at the very end of her 98th year of life. Joan is survived and mourned by her children, Phyllis (Lindsay) of North Vancouver, John (Connie) of New Hampshire and Patricia (Ron) of Regina. She was a loving grandmother to five grandchildren: Jan (Jeremy), Tim (Elizabeth), Bree, Spencer and Reid. In addition, she is survived by four great grandchildren plus her sister-in-law, Brenda, and nephews, Sean (Kathy) and Guy (Carly). Joan was predeceased by her elder son, Ralph G. Ferguson (1989), her husband, Ross G. Ferguson (2009) and all three of her siblings, Mary (2018), Ralph (2003) and Nancy (2001) Bunting. Joan was born in Alstonefield, Staffordshire where there are records of her family extending back well over 400 years. In 1925, her parents, Ralph and Florence (née Adams) Bunting, immigrated along with their two young daughters, from England to Neepawa, Manitoba where one of her father's sisters and her family had settled. Joan grew up on a Soldier Homestead Grant farm a mile outside of Kelwood, excelled in school and then attended Central Normal School in Winnipeg becoming a teacher. She taught in several other places in Manitoba before moving to Goodlands in 1946. There she was spotted by her future husband the first time she worshipped at the local United Church. She and Ross married in Kelwood on July 2, 1949. Ross and Joan had their first three children while on the family farm at Goodlands before leaving in 1957 to seek employment in Brandon. Due to Ross's work as a grain buyer for Pool Elevators they then lived in Souris, Snowflake, Lena, Miniota and Regent. In 1966, when Ross began work for United Grain Growers, they arrived in Ninga which remained their beloved home for decades. Starting in 1968 Joan taught primary grades first at the two-room school in Ninga and then, after it closed, for a few years in Boissevain. After semi-retiring, she and Ross ran the Ninga Post Office where her legible teacher hand-writing was called upon by various residents to fill in many government forms neatly in those pre-computer days. In her various communities Joan was an active volunteer in particular as an Explorer leader in Miniota and a 4-H leader in Ninga. For well over four decades, Joan was involved in many areas of service with St. Paul's United Church in Boissevain through the UCW and other committees. The one she most cherished was serving on the Refugee Committee in the late seventies when St Paul's sponsored the Nguyen family. Even after they moved to urban areas, Joan's bonds with them were caring and long-lasting - she was honoured to be invited to family weddings and treasured the artistic cards often sent to her by the youngest daughter, Chinh. Ross and Joan were avid campers for almost fifty years starting in 1960. Progressing from a tent to a camper van to a trailer they eventually visited all of Canada's provinces except Newfoundland. They also traveled throughout the northern USA, to Australia and Singapore as well as to England where she was able to visit her birthplace and fulfil a long-cherished dream to re-connect with her cousin, Frank Bestwick – they had been born on the same day to mothers who were sisters living in the same village. Like her mother and younger sister, Nancy, Joan was an excellent needlewoman. From knitting Mary Maxim sweaters for the entire family in the sixties to sewing including re-modelling adult garments into children's ones to creating countless doll clothes and baby afghans, her hands were always busy. Even in her early nineties she crocheted tiny white stoles for each baby baptized at St. Paul's. With no immediate family left in Manitoba, Joan moved to Regina in 2013 to be closer to Trish, Ron and their children and to stay in the prairie setting she loved. Multiple visits each week from her beloved grand-daughter, Bree, were a source of happiness and purpose for them both. The family deeply appreciates the care she received from the nurses, aides and all other staff at Victoria Park Care Home. Their obvious affection for her was so apparent during her last days. There will be a memorial service for Joan at St. Paul's United in Boissevain at a later time.