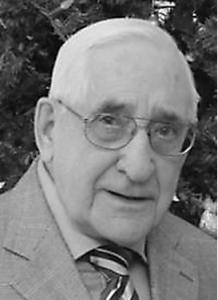 Allan "Al" Arnold, (a.k.a. "sonny"), passed away peacefully at Fairview Home in Brandon on Wednesday, July 14, 2021, at the age of 98, surrounded by his wife Dorothy (nee Taylor) and niece Wendy Guest (nee Scott) by his side.

A devoted husband, Al's unwavering love and support will be forever missed by his wife of 73 years, Dorothy. A loving father to his two children: daughter, Barbara (Craig) of Cobourg, Ontario and son, Dave (Sheryl) of Saskatoon, Sask. A proud grandpa to granddaughter Monique (Andre) of Whitby, Ontario; and grandson Jean-Paul (Lindsay) of Whitby, Ontario; and great- grandchildren Jacob, Audric, Abby and Julia. Lovingly remembered by in-laws Bette (nee Taylor) and Rob Johnson of Hamiota, Manitoba; sister-in-law, May Simpson (nee Taylor) of Penticton, B.C.; and many nieces, nephews, cousins and their families from BC, AB, MB, SK & ON.

Al was born in Brandon on Feb. 12, 1923. He was the only boy with 2 younger sisters, Lorna Anne and Aileen Frances. He spent his early years in and around Brandon, Bethany and Minnedosa. His mother said "Al, get a job with the railroad, the country will always need a railroad". He listened to his mother and worked for the C.P.R. for over 40 years.

In 1942, at age 19, Al enlisted with the Royal Canadian Airforce (RCAF). He did his airplane mechanic training in Winnipeg to service Typhoon aircraft and became part of the Second Tactical Air Force (T.A.F.) 143 Wing, squadron 439. He embarked November 1943 for Scotland, England and France. Although he downplayed his role during the war, he was a significant part of the liberation of Europe in 1944-45. We are all very proud of his role and contributions.

On a blind date in September 1946, Al met Dorothy Taylor of Minnedosa and married her on June 1, 1948. Al and Dorothy had 2 railroad "brats", Barbara and David and during his time with the C.P.R. moved from and to: Brandon, Ignace, Regina, Kenora, Estevan, Saskatoon, Moose Jaw, Winnipeg and finally retired in Brandon. Al's C.P.R. transfers built a wide network of friends from coast to coast, and they seldom travelled anywhere without looking someone up in the "phone book".

In his late 80's, Al became interested in his heritage and began researching his family history online. He was not afraid to tackle the internet or a computer, much to the amazement of family and friends. The valuable work he started will now be handed down for the next generation to continue.

Al's sharp mind, generous heart, and sense of humour will be missed by all who knew him.

A private Celebration of Al's Life will be held at the Brockie Donovan Chapel on Thursday, August 12, 2021, at 11 a.m. Donations in memory of Al may be made to the Heart & Stroke Foundation, 1379 Kenaston Blvd., Winnipeg, MB, R3P 2T5.