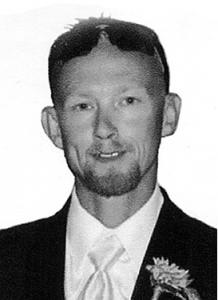 JOHNSON: Scott (Scotty) Johnson. It is with broken hearts we announce the sudden passing of Dale Allan Scott Johnson, our son, father, brother and friend. Scott was at the tender age of 39, when the sky gained another star. Scott was born in Winnipeg on October 1, 1980 and grew up in Brandon, MB. From the very start Scott was full of happiness, always wearing that famous grin. As a first grandchild, Scott was spoiled with love. He made friends quickly and easily, starting with BJ, whom even after Scott relocated to Alberta stayed loyal and true. In 1983 his loving little sister Rikki was born and Scotty was the protective big brother, in which he never ever let up. During Scott's early years, he could often be found in the garage starting his passion for woodworking, making signs, picture frames or knick-knacks. The next few years were spent experimenting in different careers. From stucco and electrical with his dad, to seismic testing with his Uncle Russell. In the early 2000's, Scott headed west to Alberta with his parents. Over the next few years, Scott tried a few different jobs, general laborer, pipeline work, and framing houses. These positions found him some friendships that lasted a lifetime. Scott was most proud of his accomplishments with the launching of his Koupe Krazy business, the determination and countless hours spent perfecting each one to make it perfect was amazing to watch. In 2007 he met Ashley Howard and they welcomed their son Chase into the world. A prouder father, there never was. In the spring of 2012 their first daughter Hannah Lee was born, she quickly became 'daddy's girl'. In 2015 their second daughter arrived, Eliza, another precious daughter to love and spoil. We will always cherish our memories of all 3 children working with Dad on his next project in the garage. Scott was predeceased by grandfathers AJ Johnson and Harold Taylor, grandmother Velma Taylor, father-in-law John Howard, and brother-in-law Cory Kendell, his best friend Buck (Dale Hofer), childhood friends Lindsey Young and Erin Chorney. Scott is survived by his children Chase (12), Hannah (8) and Eliza Johnson (4), their mother Ashley Howard, mother Edna Johnson, father Ken Johnson, sister Rikki Johnson (Jaxon and Caz Kendell), grandmother Jean Johnson, Aunty Barb Lacey (Gregg and Ashley), Aunty Sandy Brown (Bob and Ali), Aunty Jackie Parker (Sheldon), Uncle Russell Parker and numerous other aunts, uncles, cousins and lifelong friends BJ, Derek and Eric. Graveside service will be held Tuesday, August 3, 2021 at 11:00 a.m. at Rosewood Cemetery.

Rest in Peace
You are loved and missed