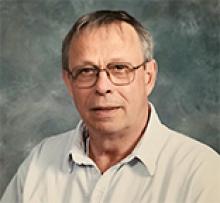 Ted passed away peacefully at the Selkirk Regional Hospital on July 22, 2021, with his brother, Ernie, at his side. He was 75 years of age.
He is survived by four siblings: Ann Schmidt, Joe (Connie), Marie Steltenpool, Ernie (Joan). He was predeceased by his parents, Frederick and Anne Ostermann and two sisters, Clare Ostermann and Pauline Kreutzer.
Ted was a beekeeper and operated a small apiary from his farm yard in Little Britain. He earned a Bachelor of Arts degree and Bachelor of Agriculture degree from the University of Manitoba. He then went on to study toward the priesthood in the seminary in Saskatoon. Sadly, his pursuit was never completed due to the onset of mental illness.
A private Mass was held with family on July 28.
In lieu of flowers, donations may be made to Little Britain Community Foundation, 31 Cedar St., St. Andrew's, MB R1A 3G4.

Condolences can be left on his tribute wall at www.gilbartfuneralhome.com