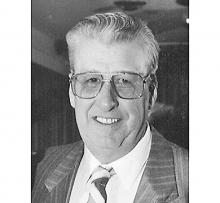 Peacefully on July 22, 2021, at the Shoal Lake Health Centre, Elmer Bennett passed away.
Elmer was born February 7, 1930 to Edgar and Irene Bennett in Grandview, MB.
Elmer was predeceased by his wife Geraldine (Jerri) June 22, 2019, father Edgar 1990, mother Irene 1992, sisters, Audrey 1994 and Hazel 1997.
Elmer was raised on the farm at Grandview and finished his schooling at Grandview. He began his working career by working in the bush in Ontario for about five years. From there he went into the trucking business where he was very successful. He bought his own truck in 1958 and proceeded to start his own trucking business. Elmer loved trucking and worked very hard to make his business a success. When he sold his trucking business in 1983 to Gardewine, he had a fleet of 15 highway trucks.
Elmer married Jerri Small in 1963 and they had two girls, Sandi and Kari and one son Terry. Elmer and Jerri lived in Shoal Lake for over 47 years. Health issues required Elmer and Jerri to move to Winnipeg. After Jerri passed away, Elmer moved to Victoria Landing in Brandon in August 2019. Elmer always felt Shoal Lake was home so he moved back to Shoal Lake to be with his friends in December of 2019.
A graveside service will be held at the Shoal Lake Cemetery, Shoal Lake, MB on Friday, August 6, 2021 at 2:00 p.m.
For those so desiring, donations may be made in Elmer's memory to the CancerCare Manitoba Foundation, 675 McDermot Ave., Rm ON1160, Winnipeg, MB R3E 9Z9 (www.cancercarefdn.mb.ca).

Messages of condolence can be shared at www.campbellfuneralhome.ca
Campbell Funeral Home, Hamiota are in care of the arrangements. (866) 620-2744