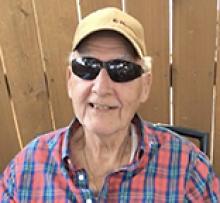 It is with great sadness that we announce the passing, on Thursday, July 22, 2021, of Morley Alexander Victor Macfarlane, after a lengthy battle with dementia, at 85 years.
Morley was the beloved son of the late Alexander Matheson Macfarlane and the late Elsie Annie Robinson of Brandon, Manitoba. The husband of Marie Macfarlane (Donahue) 1958 to 1982 and Charlotte Macfarlane (Boast) 1993 to present. The devoted father of three children, Leanne (Robert Hand), Lori Macfarlane and Scott Macfarlane. He will be missed by his grandchildren, Amy (Aaron Anderson), Andrew, Matthew and Leah, Carissa, Michael Nichols (Lisa Bonari), Tegan (Aidan Maguire) and Liam Hand as well as five great-grandchildren.
In memory of Morley, donations may be made to Alzheimer Society of Manitoba, 10-20 Donald Street, Winnipeg, MB R3C 4G2.
At Morley's request there will not be a service.

Condolences may be left on Morley's
memorial page at www.interlakecremation.ca