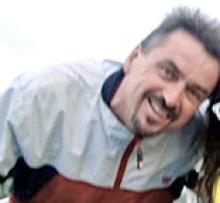 On Tuesday, July 27, 2021, Richard (Rick) Reinhold Cabel passed away peacefully at the age of 60.
Rick was born on December 9, 1960, to Reinhold and Anne-Marie Cabel. Rick's parents immigrated to Canada from Germany and settled in the North End to raise Rick, his brother, and two sisters. His family moved to Windsor Park in 1968 where he attended school. He later graduated from Pierre Radisson Collegiate in 1979 and subsequently from Red River College. He worked in purchasing in the private sector for most of his professional career. Later in Rick's life, he proudly completed courses at CDI College hoping to support and champion people living with addictions and mental health concerns.
Rick is survived by his mother Anne-Marie, partner Sandy; son Ethan (Sheila), daughters, Meaghan (Tyler) and Gillian (Ari) and granddaughter Olive, and the mother of his children, Jennifer; his brother Ray (Patty) and niece Tricia (Matthew); his sister Elizabeth (Larry) and nephew Daniel; his sister Margaret (Brian) and nieces, Crystal (Tyler) and Jessie (Ben). He was predeceased by his father Reinhold in 1998.
To know Rick was to know a gentle and kind soul. Rick loved the great outdoors, including fishing, camping, and golfing. Just like his father before him, he would spend countless hours on his many passion projects. He was always busy with his boat refurbishing, tying flies for his fly fishing excursions, thrifting, and fixing the "treasures" he found at many garage sales around the city. Rick had an intense passion for rock music and loved to play his guitar and harmonica. He was also a gifted artist (which he would deny). Above all, he loved being a father and grandfather. He will be missed by all who knew him.
The family will be holding a private service. In lieu of flowers, please donate in Rick's name to Diabetes Canada.

"If the sun refused to shine,
I would still be loving you."