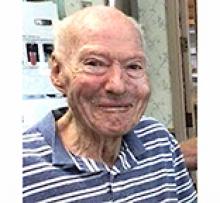 Peacefully, on the morning of July 23, 2021, Lorne left us to reunite with his sweet Helen.
Lorne was born on July 7, 1926 in Solsgirth, MB. He and Helen were married October 14, 1946. Early in their marriage they moved to Green Bay, Wisconsin for Lorne's Pre-Dent. He graduated and then they moved to Milwaukee, Wisconsin where he graduated Dentistry. With four kids in tow they moved to Selkirk where he purchased a dental practice in 1959. After many years of private practice, Lorne joined the Provincial Government as a Dentist at the Selkirk Mental Hospital. He retired at 65 to enjoy life in his sparkling pool and beautiful backyard and visits with neighbours Joan and Ted.
He was predeceased by parents, Fred and Margaret; brother John; wife Helen; daughter Joan, and son Jeffrey.
He is survived by his daughter Wendy; son Jim, grandchildren, Jona and Laura, Sara, Adrenne and Jessica, Jake and Lee and Mitchell; great-grandchildren, Michael, Charlie and Chase, Teka, Caprice and Edith and Nora. He was a very loving, caring father and Popsi and will be missed greatly.
The family would like to thank the Erickson Personal Care Home for the exceptional care that Lorne received over the past few years.
In keeping with Lorne's wishes, cremation has taken place and a private service will be held at a later date.