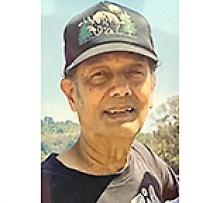 It is with great sadness we announce the passing of Henrick Rhodes Goolcharan on July 16, 2021. Henrick was born on December 10, 1943 in Port of Spain, Trinidad.
He was predeceased by his parents, Harold and Christina Goolcharan, brother Harris and sister Jean Khan.
Henrick immigrated to Canada in 1972 and worked for the Canadian Tire Corporation in Winnipeg for over 33 years.
He is survived by his brother Harry, sisters, Joan Goolcharan and Janet Mohammed, an adopted son Marlon, and by various nieces and nephews. He will be missed by many friends and coworkers.
In his latter years, Henrick spent much time in his birth country of Trinidad where he passed. In keeping with his wishes, he was buried there alongside his grandmother.